Bobby Shuttleworth is a Player to Watch in 2015

Given the starting goalkeeper spot full time in 2014, Bobby Shuttleworth endured his fair share of ups and downs during the Revs deep playoff run. Here's what to expect from him in 2015.

Share All sharing options for: Bobby Shuttleworth is a Player to Watch in 2015

When Matt Reis hung up his boots at the end of the 2013 season, many New England Revolution fans were left wondering who would step in and replace the now-retired club legend. Trades within Major League Soccer, the international market, and even the SuperDraft were all considered as pipelines for new talent between the posts.

However, the Revs needed to look no further than Reis' long-tenured back-up: Bobby Shuttleworth. The 27-year-old goalkeeper had appeared in 43 MLS games over the span of his first five seasons as a professional, but one wouldn't guess that based on Shuttleworth's impressive 2014 season.

The former University of Buffalo keeper burst onto the scene in 2014 in a major way, as he started 32 games and quickly emerged as one of the top young net-minders in the entire league. While Shuttleworth experienced a healthy dose of ups and downs last year, he is primed to contribute significantly to the Revs and hopefully aid in capturing the ever-elusive MLS Cup trophy.

Under the tutelage of Reis, head coach Jay Heaps, and goalkeeper coach Remi Roy, Shuttleworth brought his game to new heights in 2014. Formerly a floppy-haired backup, Shuttleworth made the starting spot his own, all while facing healthy competition from Brad Knighton - a perfectly competent goalkeeper in his own right. 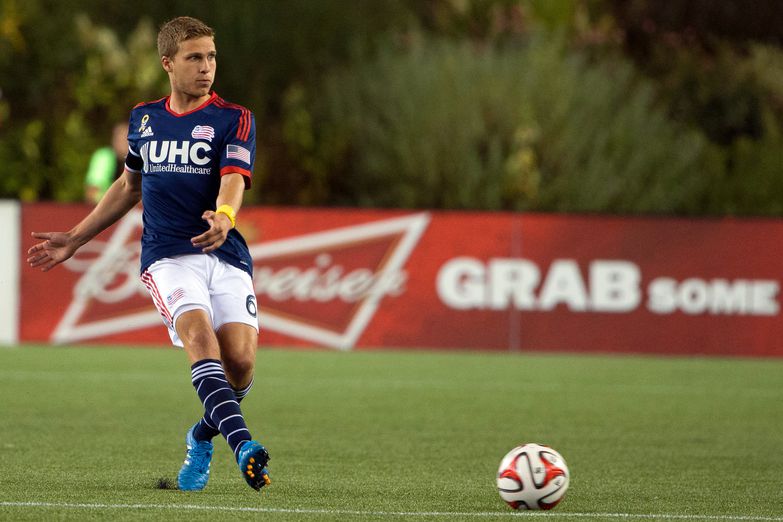 One of several players to have a productive 2014 season, Scotty Caldwell may be poised for a breakout 2015.

With all that motivation and backing, Shuttleworth made it abundantly clear in 2014 that his best attribute is his shot stopping ability. Possessing an unbelievably quick reaction time, Shuttleworth could be seen countless times getting down low to keep a ball out of the net or leaping through the air to snatch a goal-bound shot.

The below video is just one instance of this. In the October 4th 1-0 victory over the Columbus Crew, Shuttleworth got his 6-foot-2 frame down quickly to absolutely rob Aaron Schoenfeld right on the doorstep.

Even more stunning, Shuttleworth developed a knack for coming up with saves at the timeliest of moments. Whether it was to keep the Revs up a goal, help the team avoid an early deficit, or make a momentum changing save, Shuttleworth could be counted on as the last line of defense.

A.J. Soares and Jose Goncalves formed a formidable center-back pairing in front of the Tonawanda, NY native, but anything that got through would be stopped by Shuttleworth. The below clip is from the Revs' home playoff match against Columbus. With the Revs ahead 1-0, Shuttleworth comes up huge on the stroke of half-time to preserve the lead and avoid a conceded goal at the worst of times. Jairo Arrieta thought he had brought his team back into the series. Shuttleworth had other things in mind.

Another element of Shuttleworth's game that stood out in 2014 was his ability to handle crosses. Often criticized for having a poor judgement of aerial service, the Revs' number 22 proved his doubters wrong, especially towards the latter half of the season. He claimed 95% of balls sent into the box, posted an impressive punch success rate of 41%, and again came up big when it counted.

Below is a video from the Revs' 2-1 playoff victory over the New York Red Bulls. The play shows Thierry Henry lofting a delectable ball in the space between Shuttleworth, Goncalves, and left-back Kevin Alston. Rather than timidly staying on his line, Shuttleworth confidently comes out to punch the ball clear and rob Tim Cahill - one of the best headers of a ball in MLS, if not world-wide - of a sure goal.

With a matured game in hand, Shuttleworth put up some respectable numbers in 2014. He posted eight shutouts, allowed 1.3 goals a game, made 2.27 saves a game, and stopped two of the five penalties he faced. While none of those statistics are other-worldly, they helped propel the Revs to an MLS Cup final. Also, without Shuttleworth's steady presence in net, the Revs would probably not have become one of the most exciting teams to watch in MLS.

There is no denying that Shuttleworth brought his game to new heights during the 2014 season. The media was hailing his improved play and some were even suggesting Jurgen Klinsmann should call him into the recent January national team camp.

Regardless of what everyone else is saying, the onus will be on Shuttleworth to be more consistent in 2015 and possibly raise the bar even higher. Down the stretch he was sublime, but there were signs during the early and middle portions of the season that Shuttleworth may not have been ready for prime time.

With Knighton and a presumed number three goalkeeper nipping at his heels, Shuttleworth will surely be held to a high standard week in and week out. And given how crucial he was to the Revs incredible 2014 season, there is every reason to believe Shuttleworth can further cement himself as one of the best goalkeepers in MLS.

All statistics in this article are from Squawka.com.

Have thoughts on Shuttleworth's 2014 campaign? How do you see him faring in 2015? Share your thoughts below.