Revolution and Jermaine Jones Excited and Ready to Work

The Revolution unveiled Jermaine Jones to the media on Tuesday afternoon. It was Jones' first media appearance since signing with the club, as well as his first day of training.

Share All sharing options for: Revolution and Jermaine Jones Excited and Ready to Work

Jermaine Jones was unveiled at Gillette Stadium on Tuesday afternoon in Foxboro, and the word of the day was "excitement." In fact, you could have excused a bystander for believing that the New England Revolution staff on the podium at the press conference were actually fans, as well as Jermaine himself, as all parties seemed eager to begin the Jones Era in New England.

"It is absolutely a great day for us at the club," said team President Brian Bilello. "Very, very excited to add a player like Jermaine to the organization and we just can't wait to see him out there playing games for us."

As anyone following the Revolution probably knows, the Jones acquisition represents the culmination of a long process in which the Revs and the Chicago Fire fought for the rights to the United States' international. Pundits and analysts all over the country see-sawed between Foxboro and Bridgeview, with every day seeming to bring a new favored destination. 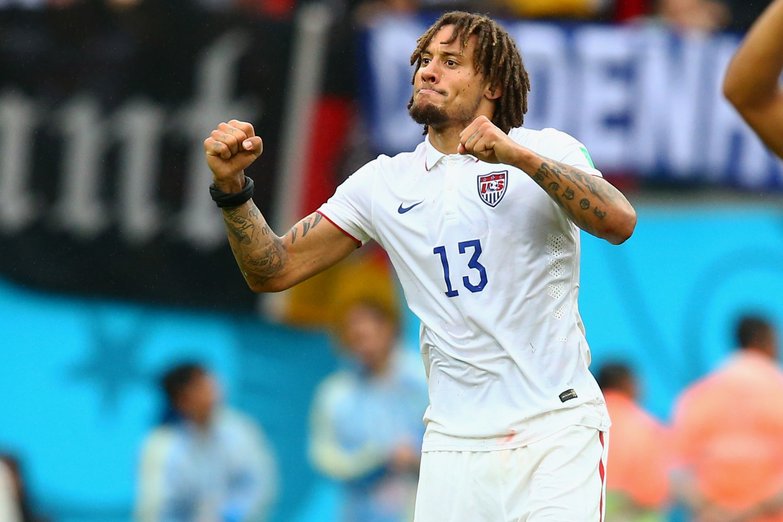 MLS and the Revolution have confirmed that Jermaine Jones is now a New England player.

In the end, however, it was New England that emerged victorious, thanks to a bizarre blind-draw. Now that the transfer circus is over, though, both the player and the club can focus on the task at hand: coming through the next ten games in an Eastern Conference playoff spot. Apparently, Jermaine would like nothing more than to get to work with his new club.

"I'm happy to be here," said the German-born midfielder. "I'm really happy that I can start to go back on the pitch. I'm happy that all the people here, sitting with me here, and the Kraft family, that they made it happen, that I can come back on pitch here for their team. I'm ready to go, and I hope the coach will push me and push me that I'll be ready for the game in Toronto."

Setting this weekend's match against Toronto as a debut date may be a tad ambitious, but Jones has nevertheless arrived ready to work. He participated in his first training session with the team on Tuesday morning, reportedly competing with his new teammates with the same intensity seen for the Yanks in Brazil.

Jones is the type of player who adds ferocity and technical ability to any side he joins. His strong tackling and endless motor protects the back line, while his goal against Portugal in the group stage of the World Cup should silence any doubts as to his skill with the ball.

"His presence on the field is going to give us a huge lift," Heaps said. "You know, there's a lot of different roles in the center of midfield that we see him playing. Tactically, we can change how we pivot the triangle. I don't want to dive into all the tactics but, at the same time, he plays a lot of those roles.

"He fits exactly what we were looking for: a ball-winning midfielder, a great presence in there."

More: Twitter Reacts to Jones News Where Does Jones Fit With Revs? How Does Jones Affect Expectations?

Whether it be as a ball-winning midfielder, a destroyer, a creator, or just a box-to-box runner, Jones should be able to fit in as needed. But it's his role as a leader that Heaps seems most excited to explore.

"I think most importantly was just, when he walked in the door today, there's an instant respect. I think our players, last game, [our starting lineup] we averaged 23 years of age...across the board, and so instantly they're looking for someone to lead, and I think today he walked in and that was what the players felt around him."

Heaps isn't wrong. Since losing Andy Dorman to a long-term injury, the only old head consistently in the squad has been team captain Jose Goncalves, and even an experienced and cultured player like Goncalves cannot be expected to lead a young team on his own.

For his part, Jones appears to relish the idea of being a team leader, openly embracing the role. He even had some words of warning for his young teammates.

"Anyone who knows me know I'm not a guy who likes to lose," said Jones. "We have a young team, maybe sometimes I have to kick some guys in [the butt]*, but only in a good way. I like to win, and I will try everything so that we can get some wins."

Jones was also happy to put to rest rumors that he preferred Chicago as a destination.

"I have to say, a lot of people were tweeting that I was saying that I wanted to play in Chicago," he stated. "The point was not true. I already said that on my Twitter. The point was that I said that I am close to my family, and I have to say a big thanks to them, they already told me that they would be behind me and would stay in LA and push me for every decision that I do. We were sitting down, talking about everything, I was talking it over with my agent, and the New England Revolution, they pushed so bad that they wanted me, and if you have that feeling that somebody is really interested and they pushed so far, I would say ‘go to New England.'"

* - Censored for language. Everyone laughed. Heaps loved the answer.