The A.J. Soares D-Mid Experiment: Did It Work?

With Andy Dorman unavailable, defender A.J. Soares stepped into the midfield for the first time in his professional career. On paper, it made sense. But did it actually work?

Share All sharing options for: The A.J. Soares D-Mid Experiment: Did It Work?

Friday night against Real Salt Lake, Revolution Jay Heaps had a tough decision to make regarding his lineup. With usual holding/defensive midfielder Andy Dorman suspended due to yellow card accumulation, Heaps was forced to replace the veteran in his starting XI.

Many expected the smart and generally safe-playing Scott Caldwell to take his place, but the Revolution gaffer threw everyone for a loop when it was announced shortly before kick-off that center back A. J. Soares, not Caldwell, would be sitting in front of the backline in Dorman's spot.

"We wanted to get some bite in there and some ball-winning," Heaps told revolutionsoccer.net after the game. "To A.J.'s credit, I thought he did a nice job tonight."

Aside from Soares' known ball-winning skills and generally strong, physical nature on the pitch, this tactical shift also allowed for Andrew Farrell to slide into central defense and pair alongside captain Jose Goncalves. Farrell, like Goncalves, possesses a great deal of mobility and his speed seemed like it would make him a good match-up against the speedy Joao Plata, which proved to be true.

Really it was a win-win for Heaps and, on paper, it made sense. But now that it's all said and done, was the A.J. Soares midfield experiment a success? Let's take a look at some stats.

Defensively, Soares was undoubtedly a contributor. He had three key interceptions, two clearances, and seven recoveries in the Revs defensive half. You can see these visualized below, courtesy of MLSsoccer.com's boxscore chalkboard: 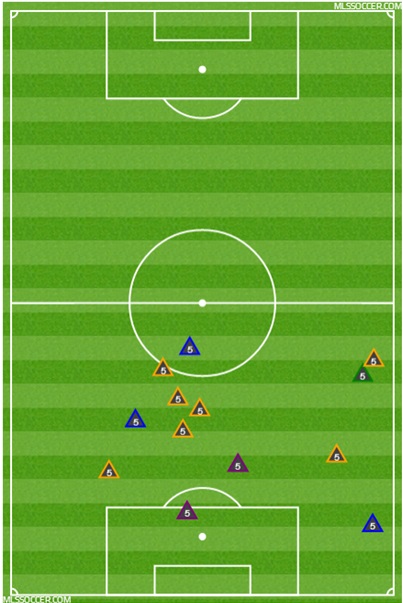 While Soares is known to be an effective tackler and ball-winner, his distribution isn't really considered one of his stronger traits. However, with that said, his passing percentage on Friday night was a pretty impressive 82%, according to whoscored.com. Compared to his average passing completion for the 2014 season so far of 76% (provided by squawka.com), that's not too shabby.

But completion percentage is only one part of the story. The Revolution struggled to get much going in the way of possession in the midfield on Friday, and the defensive midfielder's role is crucial in that area. When you compare Soares' distribution on Friday night (left side) to Andy Dorman's the week before against the Philadelphia Union (right side), you can pretty clearly see the drop off in influence: 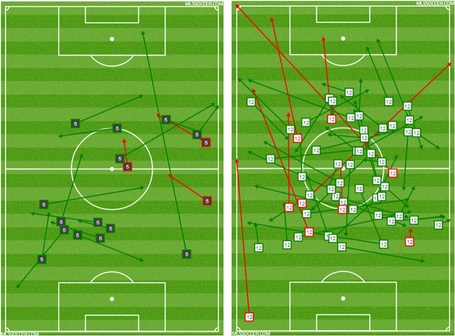 With Soares contributing minimally in regards to midfield possession, Lee Nguyen and Daigo Kobayashi had to pick up a lot of the slack. Kobayashi in particular completed an impressive 91% of his passes (according to whoscored.com) whereas Nguyen completed 76% of his.

But on a night when the Revs' attack wasn't exactly clicking, the experiment overall seemed to fall a bit short. On a different night, perhaps the result would have been a bit more favorable. Soares' positional switch was far from the crux of New England's follies on Friday night, but it didn't seem to help matters all that much either, at least not in the big picture. It's hard to call it a failed experiment, but just as hard to call it a success as well. As an emergency fill-in though, it wasn't the worst idea. But whether we see Soares feature in this role much more in the future seems a bit unlikely.