Should Saer Sene be a Starter for the Revolution?

With the Revolution attack in a funk, it might be time to introduce Saer Sene to the starting lineup. The Frenchman had two goals this past week and received praise from head coach Jay Heaps.

Share All sharing options for: Should Saer Sene be a Starter for the Revolution?

Currently on a three-game losing streak, head coach Jay Heaps might be looking to make changes ahead of the New England Revolution's July 4th meeting with Real Salt Lake. Saer Sene, who scored two goals this past week, will be giving Heaps a lot to think about when he's creating the starting lineup.

Sene's year hasn't gone exactly as planned. The Frenchman suffered a left leg injury towards the end of the 2013, but made a remarkable recovery, playing in the first seven games of this season. After a brief hiatus because of personal reasons, Sene found it difficult to break into the game-day 18. On June 8th, Sene made his first appearance since April 19th when he played nine minutes as a substitute against the New York Red Bulls.

Revs Looking to RI for Stadium? 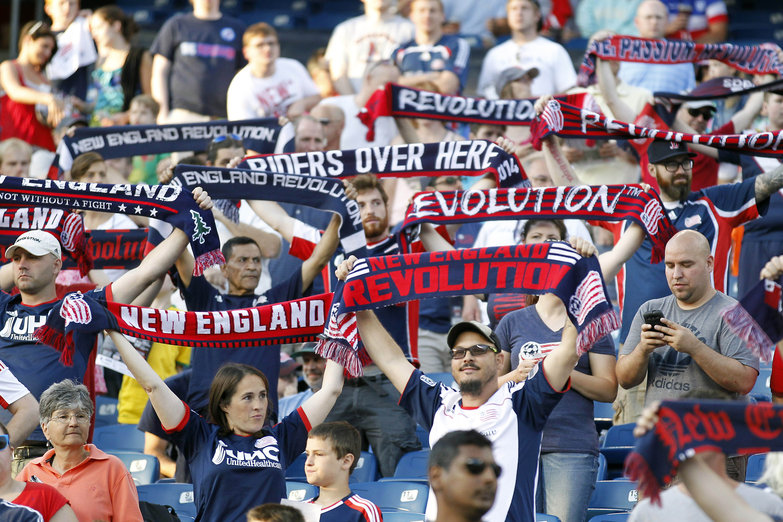 Word is out that officials from Providence and Central Falls have had conversations with Brian Bilello over bringing the Revs to Rhode Island.

Sene's time on the field was brief, but he did receive praise from Heaps. The gaffer claimed that Sene's inclusion was due to good performances in training. He went on to say that Sene did a "good job" and was "dangerous."

Sene missed the team's US Open Cup match against the Richmond Kickers after being listed as questionable with groin tightness. He would return in time to play against the Rochester Rhinos, a game in which he started and scored.

Sene was relegated to the bench on Saturday when the Revs faced the Philadelphia Union, but saw twenty minutes of action after replacing Daigo Kobayashi in the 70th minute. Four minutes after entering, Sene got on the score sheet when he pushed in a Kelyn Rowe cross.

Sene again earned compliments from Heaps as the coach said, "Saer did a nice job of changing the game and getting us back into it."

With the Revolution in a funk, particularly offensively, it might be time to reintroduce Sene to the starting lineup. After all, the lanky striker was the team's leading scorer in 2012 with 11 goals. In 2013, Sene was an important contributor to the Revolution's late push for the playoffs as he had two goals and three assists during the month of August.

One of the most difficult parts about including Sene in the starting lineup is deciding where to put him. During his first year with the Revs, Sene was largely used as a forward as he made 20 starts at that position and three on the right wing. Sene has found success as a forward, but he doesn't really have the holdup skills to play alone. Instead of playing with his back to goal, Sene likes to get behind the defense or take players on.

Sene can also play on the wings, which is the role that he's played a lot of recently. On the peripheries, he's able to use his speed to challenge defenders, but he's also farther from goal. Sene is a player that likes to score, and can do so if presented with the right circumstances. Putting him on the wings leads to more long-distance shots, something which can, but doesn't always, lead to goals.

If Heaps is serious about getting Sene on the field, he might consider moving to a 4-4-2 formation with the former Bayern Munich player pairing with Patrick Mullins. Mullins would occupy the role of the traditional number 9, freeing Sene to torment defenses with his movement and creativity. The duo would rely heavily on the support and service of players like Diego Fagundez and Lee Nguyen.

There's a lot to consider when it comes to putting Sene in the starting eleven since it requires a personnel change and maybe even a formation shift. It may take time before Sene becomes a fixture on this team, but if he continues to put forth solid performances it will be hard to keep him off the field.