The Revolution took care of business in the Open Cup fifth round despite using just two regular starters from the opening whistle. This amazing display of depth will be necessary as they jump into a seven-match month of July.

Depth is a key component to any great squad in team sports. Champions tend to have the pieces to be able to grind out long, grueling seasons, survive injuries to key players, and generally look just as efficient and effective no matter who is in the lineup.

Soccer is no different. Against the Rochester Rhinos on Wednesday night, the New England Revolution displayed that they have the depth to handle the pursuit of silverware on two fronts going into a congested July schedule. It was that depth that became the key to their 2-1 win, as head coach Jay Heaps ran out a starting XI that featured just two regular first-choice players.

Who Starts vs. Rhinos and Union? 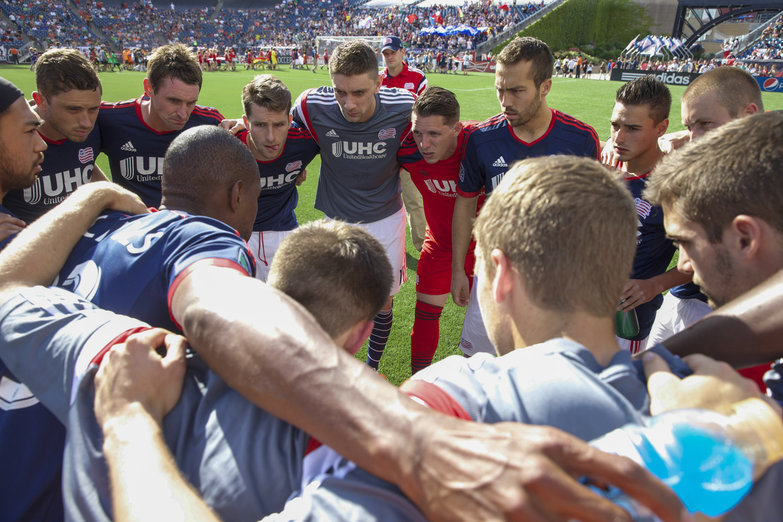 With a busy month ahead, Seth Macomber looks at how Jay Heaps might rotate his lineup in the next two matches.

"I think [our depth] really good, I mean, you look at our lineup, we went with a lot of guys, a lot of different guys," said Jay Heaps after the game. "I thought that Alec Sundly stepped in and did an excellent job. I thought Donnie Smith did a great job a left-back, and [Stephen McCarthy] and Darrius [Barnes] were their normal selves. Those guys, having not played those positions for us recently, I thought they did excellent."

Removing Lee Nguyen and Jose Goncalves from the equation, Wednesday night's starting group had just 23 starts combined. That includes last week's Open Cup win over Richmond. Midfielder Alec Sundly, who ironically spends most of his days on loan in Rochester, made the first competitive start of his career for the Revs on the evening.

Despite that, New England looked incisive and hungry from the get-go, and jumped on the board early thanks to slick interplay between Nguyen and Saer Sene in the 11th minute. Nguyen pulled the strings again in the 33rd minute, setting up Kelyn Rowe for a good finish past Rhinos goalkeeper John McCarthy.

It may have been the usual midfield general making things happen, but the players around Nguyen were firing on all cylinders, especially in the first half. Sene and Rowe in particular looked sharp, which is not a coincidence, since both players are fighting to get their jobs back in the regular starting lineup. The Open Cup provides a perfect opportunity to do just that, and the seriousness with which this team treats the competition is a boon for those fringe players.

"I think Jay takes the Open Cup very seriously, as well as do all of us," said Rowe. "It's for guys like myself who are fighting to get a spot back in that starting lineup. Guys who can get on a roll. I think Saer [Sene] did very well today. We're both fighting to get that starting spot back and I think that's going to be a battle every week. I think these games are going to help us out and get some confidence."

Confidence is a commodity the players who featured on the night will need going into the month of July. After a favorable first-half schedule that saw the Revolution avoid the fixture congestion that plagued several of their opponents, New England is opening the second half in brutal fashion. In fact, advancing to the quarter-finals of the Open Cup only makes it worse.

The Revs will play no less than seven matches in the month of July. A lesser team would be forced to run its best players into the ground during this stretch, probably destroying its season in the process. Hopefully, New England will have other options.

"It's hard to play six, seven games in a month, so I think the lineup's going to be rotating a little bit here and there," Rowe commented. "We're going to take opportunities when we get them. I think, like today, it was Saer and myself, I think we took good advantage."

Seeing Rowe channel a bit of the flair and danger that he displayed in 2013 had to be encouraging for Heaps, who will need his vaunted midfield depth playing on-point in order to keep all of his legs fresh throughout the grueling summer months. Up top, though, options outside of the normal starting trio of Patrick Mullins, Diego Fagundez, and Teal Bunbury were starting to look sub-par.

Cue the re-emergence of Saer Sene on Wednesday night, who scored his first goal of 2014 with a typical left-footed finish. His goal, and some later flashes from substitute Charlie Davies, should leave Heaps feeling optimistic about his forward options going into the midsummer heat.

"I think Saer gave us a lot more than he probably really is fit enough to do," said the coach. "I thought he was really sharp in the beginning of the game when he was feeling legs, but I think in the second half we probably went an extra ten or fifteen minutes.

"I...thought Saer was good while he was fit, and I thought Charlie came in and added a dimension for us."

New England is in action again on Saturday night at home against the Philadelphia Union, who will double up as their Open Cup quarterfinal opponents on July 8th.