The Revolution played their Open Cup match on Wednesday night in Providence at Brown University. The alternative venue provided an opportunity for Providence-area fans to see their team live, and created a cozy atmosphere that the players clearly enjoyed.

Share All sharing options for: Revolution Open Cup Atmosphere in Providence Great for Players and Fans

New England Revolution fans in Providence were treated to a rare experience on Wednesday night when the local team visited Brown University's Stevenson Field for an Open Cup match against the Rochester Rhinos. This continued the Revs' trend of hosting early-round home matches at venues outside of Gillette Stadium, accessible by fans who normally can't get to Foxboro. Last season a match was held at Harvard University in Cambridge.

The Revs did not disappoint, running out to a two-goal lead in the first half and eventually closing out the victory 2-1. The win secured the club's advancement to the quarter-finals of the United States' oldest knockout competition for the second-straight year. 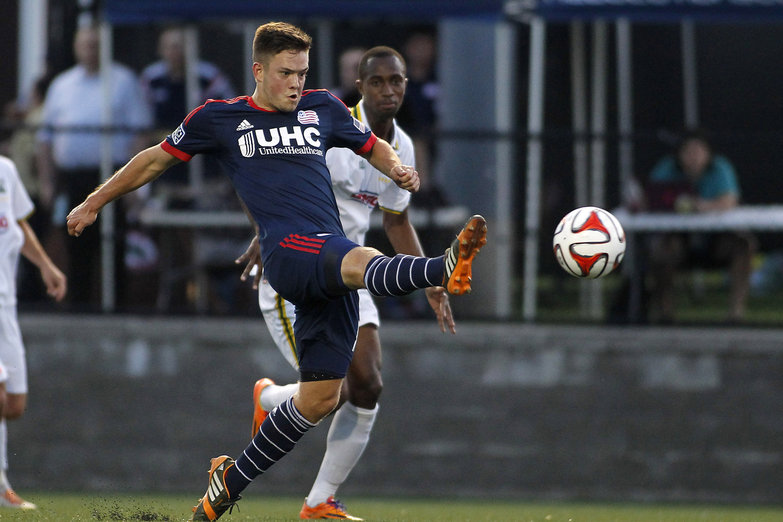 The Revs beat the Rhinos in Providence on Wednesday, but yet again they turned in a poorer second-half performance.

"We've never played in Providence, we have friends too in Providence, people who love the Revs and don't have the opportunity to come to Gillette Stadium to watch us," said goal scorer Saer Sene after the match. "I think it's a very good occasion to come here and play, so that they see us, we sign some autographs, to give them some fun, too."

Warm sentiments toward a underserved portion of the fan base is certainly a noble and valid motivation for holding the match at an alternate venue, but atmosphere is also a key consideration. In this regard, Providence did not disappoint, bringing a small but ardent contingent of fans who packed into the bleachers at Stevenson.

The pitch itself was small and the stands were right on the edge of the field, meaning that the fans were very close to the action. Fans could hear exactly what the players were saying and doing in the game, and the players could hear every chant from the fans, including the raucous chants from the Providence-based Rebellion supporters' group.

"We like it, we like it, it was really intimate," said Kelyn Rowe, who had the match winner. "We could hear everyone going, and usually you can hear bits and pieces of it, but we could hear everything. Having everyone close to the field, that real intimate vibe, is pretty cool. I think everyone here was very loud and very happy to be here."

If the Revs advance past the quarter-finals and are awarded home-field advantage for any future round (semi-final or final), it is highly unlikely that they will choose a small venue like Stevenson Field again. High-round matches are bigger draws, and Gillette will probably be the obvious choice.

Regardless, this one match in Providence gave Rhode Island-area fans a chance to see their heroes and players get a win up close and personal without having to hike all the way to Foxboro to do it. That, in and of itself, is justification enough.