The Revs are set to face off against the Rhinos in the fifth round of the US Open Cup and Heaps has already begun his preparations.

With only a week between the fourth and fifth rounds of the US Open Cup, head coach Jay Heaps has already begun preparations for his team's next match against the Rochester Rhinos. The New England Revolution advanced to this stage by defeating the Richmond Kickers 3-2 while the Rhinos bested D.C. United 1-0 to earn their passage.

The two teams know each other well since the Rhinos serve as the Revolution's USL Pro affiliate. Alec Sundly, Jossimar Sanchez and Luis Soffner have been in Rochester for the entire season so far with Donnie Smith participating in two short-term loans. 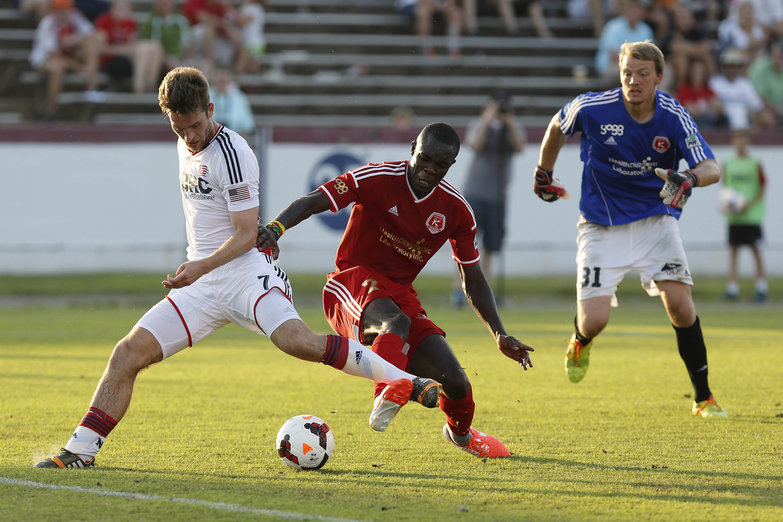 The Revs let it get close, but they defeated the Richmond Kickers to advance in the US Open Cup.

Heaps has been tracking the Rhinos and knows that they will pose a daunting challenge despite being from a lower division. During fourth-round action, the New York Red Bulls, Real Salt Lake, Chivas USA and D.C. were ousted by teams in the USL Pro and NASL. The Revs will want to avoid the same fate when they play the Rhinos.

"We watch them quite closely because we want to get a good sense of our players down there and we're also scouting their players," Heaps commented. "I think they're a really good team. So, it's going to be difficult."

Wednesday's game will kick off a busy stretch for the Revs as they are scheduled to play two games next week. After facing the Rhinos in Providence, the team will welcome the Philadelphia Union to Foxboro for a Saturday fixture. The Revs then have six league games in the month of July.

Lineup rotation will be crucial during this busy stretch as they will want to keep players fresh and avoid injuries. Kevin Alston and Shalrie Joseph were listed as out in the most recent injury report while Saer Sene and Kelyn Rowe were questionable. Stephen McCarthy was forced to leave the team's most recent game with a minor knock.

The summer heat will also affect lineup decisions, which is one reason that Heaps would like to see Open Cup games played sooner in the future.

Heaps is confident that he has the personnel to put forth strong lineups in both Open Cup and league play. Players that are regularly on the bench include the team's 2011 top scorer Sene, 2012 team Defender of the Year McCarthy and former U.S. national team star Charlie Davies.

"We feel that we want to have a deep team," Heaps stated. "There are going to be guys that are called upon to step up to play on Wednesday that were here tonight, that played tonight. We want to make sure that we balance enough to have a quick turnaround and a huge game on Saturday as well."

The additional games will be an opportunity for reserve players to make a plea for more league minutes. Wednesday's game featured a "blended" lineup where regular starters, like Jose Goncalves and Lee Nguyen, played alongside reserves, like Scott Caldwell and Steve Neumann. This trend could continue during the latter stages of the Open Cup.