The Revolution have suffered back-to-back 2-0 losses. More importantly, the losses have continued a trend where the Revs lose games where they don't score first.

Share All sharing options for: Analyzing the Revolution's Recent Losses

The New England Revolution enter the World Cup break on a disappointing two-game losing streak. The Revs were defeated 2-0 by the last place Montreal Impact before replicating the same score line against a shorthanded New York Red Bulls. Both games highlight a long-standing problem for the Revs: they struggle when their opponent scores first.

This trend isn't unique to the Revs. Generally speaking, soccer favors the team that gains the lead first. Once a team scores, they can sit back and absorb pressure while keeping a watchful eye on the clock. The method of "parking the bus" isn't beautiful, but it can be effective. Right, Jose Mourinho?

The losses to Montreal and New York are similar in the sense that the Revs conceded an early goal. The opposing players then aligned themselves behind the ball, which disrupts the Revolution's style of play. With their quick passing and creative footwork, the Revs are a team that does its best work from inside the penalty box. 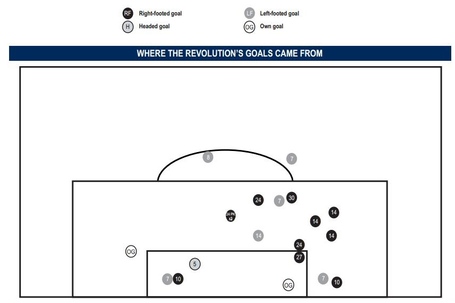 When opponents pack the box, the Revs begin to get frustrated, which leads to more players pushing forward. Opponents will be conservative in the attack, waiting for the perfect opportunity to add an insurance goal.

Montreal got a second goal when the Revs were over-committed offensively. Issey Nakajima-Farran marched forward and launched a shot from 25 yards out. Goalkeeper Bobby Shuttleworth spilled the save, allowing Jack McInerney to increase the deficit.

New York found a second goal off a set piece. With the Red Bulls out of their defensive shell, Johnny Steele sent in a sub-par free kick that wasn't properly dealt with by the Revs. The ball ultimately fell to Peguy Luyindula, who volleyed it into the back of the net.

So we've identified the problem, but what is the solution? This is the difficult part because defensive soccer is meant to irritate the opposition.

The first thing the Revs can do is to tighten up the defense. In 2013, the Revs had only conceded nine goals during the first 14 games. This year, they have allowed 18 during the same timeframe. A scoreless game is an open game since neither team has control (Note: the Revs have scored six more goals compared to last year and have three more points).

The Revs are obviously not trying to forfeit early goals. Instead, these goals are coming from silly mistakes that can and must be cleaned up. Against Montreal, Andres Romero made a simple run that went unnoticed by the defense. New York's first goal came after Shuttleworth collided with Andy Dorman to leave the goal unmanned. The current back line must become more composed or there will need to be changes.

If the Revs do end up allowing an early goal then they still have ways to break down a defensive opponent. For example, they can use long shots as a way of drawing defenders out of the box. I imagine this is part of the reason that Kelyn Rowe was inserted at halftime on Sunday.

Rowe has a knack for scoring long-distance stunners. The Washington native hit several bombs during the 2013 season. By sacrificing Patrick Mullins, head coach Jay Heaps had three of his best long-range shooters on the field: Lee Nguyen, Chris Tierney and Rowe. Heaps would later add Saer Sene to the mix, a player that is never shy about shooting.

The shot map from Sunday shows that the Revs were actively shooting from outside the box. The team had 22 shots with over half coming from distance.

Of course, the long shots have to be dangerous enough to draw defenders out of the penalty area. On Sunday, the Revs weren't shooting with enough accuracy as only nine shots were on target. Luis Robles later called most of his saves "routine." In fact, the shot that earned Robles a Save of the Week nomination came from his teammate Ibrahim Sekagya.

The Revs could also use the wings as a way of disrupting a defensive team. The Red Bulls were so focused on congesting the middle of the field that they left plenty of space on the flanks. It was almost humorous to watch Teal Bunbury openly demand the ball from his wide open position on the peripheries. The ball eventually arrived to him in the 31st minute, but he put his powerful shot was directly at Robles.

Shooting generally isn't the best option because of the difficult angle a player has on the flank. Instead, it's typically better to send in a cross. The Revs, however, don't necessarily have the personnel to do this. According to WhoScored.com the Revs attempt an average of 15 crosses per game, which places them as 18th in the league.

Even when the team does send in a cross, players struggle to win aerial duels. According to WhoScored.com Mullins, who has been the first choice center forward for six games now, has won 19 of 43 aerial duels that he has engaged in putting his success rate at 44%. Bunbury, the primary alternate, has won 33 of 96 aerial duels (34%).

Many of the league's most notable holdup forwards win close to 50% of their aerial duels. Eddie Johnson has gone 52 for 102, Blas Perez is 47 for 92 and Alan Gordon has won 42 of his 81. A good forward doesn't have to win aerial duels (current co-leader for the MLS Golden Boot Bradley Wright-Phillips has only won 27%), but it is a good skill to have when your team is looking for a goal against a defensive side.

With the current Revolution squad largely preferring to play the ball on the ground, it will be interesting to see if the front office looks to sign a traditional winger and/or holdup forward when the transfer window reopens.

The crisp passing of Diego Fagundez, Daigo Kobayashi, Nguyen, Bunbury and Rowe can be mesmerizing, but it isn't often that these midfielders get to the end line to send in a cross. In fact, Donnie Smith is basically the team's only traditional winger. Most of the Revolution's wide crosses come from Tierney and Andrew Farrell. Tierney's service is generally great while Farrell's is commonly suspect.

Looking at the forwards, Mullins has been great, but is also a rookie. Adversaries will eventually take closer notice of him and the long season will likely weigh on him at some point. The second best holdup option is probably Dimitry Imbongo, but he has been out of favor recently. Signing an experienced number 9 could be valuable for a host of reasons.

The Revs are a young, dynamic team with a lot of potential. Furthermore, they are led by a coach with incredible passion who has shown steady growth over the past three seasons. Still, the Revolution have a problem: they are greatly affected by an opponent scoring. It's a difficult problem to deal with, but I have confidence that the team will find a solution.