The Revs are sitting atop the Eastern Conference standings and have eight players on the All-Star ballot. Could this spell the first Revolution All-Star since 2011?

Share All sharing options for: Handicapping the Revolution's All-Star Candidates

Voting has begun for the 2014 MLS All-Star game and the New England Revolution have eight players on the ballot. Among the 152 listed players are the Revolution's own Teal Bunbury, Diego Fagundez, Andrew Farrell, Jose Goncalves, Patrick Mullins, Lee Nguyen, Bobby Shuttleworth and A.J. Soares.

The Revs have been shunned from the All-Star game since 2011. That year, Shalrie Joseph was part of the squad that suffered a 4-0 loss to Manchester United. It looked like the Revolution had a solid candidate last year in Jose Goncalves, but he was passed over in favor of center backs Matt Besler, Aurelien Collin, and Omar Gonzalez. Goncalves went on to be named Defender of the Year.

Revs Grind Out Win Over D.C. 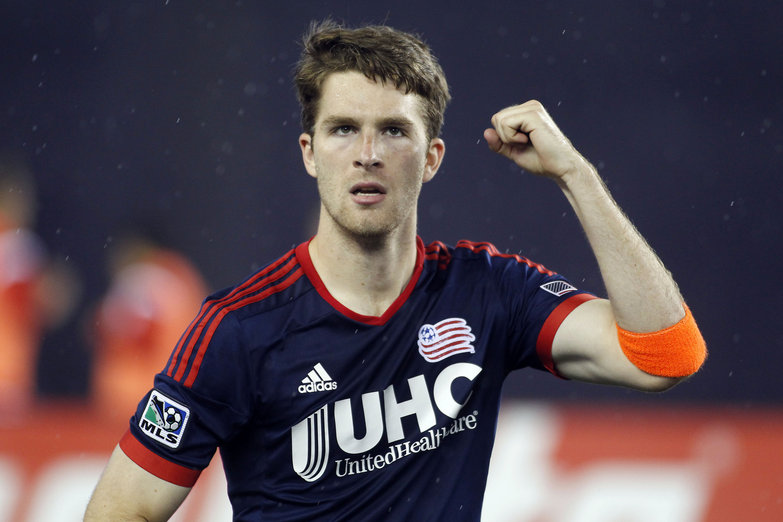 Diego Fagundez and Patrick Mullins stayed hot, picking up a goal each in the Revs' 2-1 win over United.

Goncalves' snub was shameful, but not entirely surprising, since the Revs don't garner a lot of national attention. With the team currently sitting on top of the Eastern Conference, it's hard to ignore this year's player quality. Popular outlets like MLSSoccer.com and Soccer by Ives have increased their coverage of the Revs, but will it be enough to get a player, or two, on the field to face Bayern Munich?

Perhaps a better question is: who has the best chance to break through? Let's take a look at the candidates.

Nguyen is the current favorite to be named a MLS All-Star. The midfield maestro has been active on both sides of the ball and currently leads the team with five goals. Some pundits were calling for Nguyen to be named to the preliminary World Cup roster while others are looking at him as an early MVP candidate. Highlighting his importance is the fact that the only game that Nguyen missed this year was the 4-0 thumping handed down by the Houston Dynamo. Forecast: Highly Possible

Farrell is also highly deserving of an All-Star nod. Playing solely as a right back last year, Farrell has showcased his versatility this year by seamlessly transitioning to the middle when Goncalves is unavailable.  Regardless of where he plays, Farrell is valuable as suggested by the .91 goals-against average that the Revs have accrued this season with him on the field. Farrell deserves to play in Portland, likely as a right back. Forecast: Possible

Fagundez has caught fire in recent weeks with four goals and two assists in the last three games. The local product led the team in goals last season and already ranks as the ninth best scorer in club history. The 19-year-old's case is strengthened because of his marketability. A young, dynamic, homegrown product is exactly the type of player that the league wants to broadcast (RE: DeAndre Yedlin in 2013). Many people are hoping that Fagundez one day suits up for the U.S. national team, but seeing him wear the All-Star jersey would work for now. Forecast: Possible

Goncalves has only played in six games this year, but he has shown qualities that makes him the reigning Defender of the Year. Last year, he helped post several impressive numbers, including a club record 14 shutouts and an impressive 1.12 goals against average. This year, Goncalves has continued to wear the captain's armband while helping his team earn two shutouts. Although he hasn't played much, the Portuguese defender could get the nod on name recognition alone. Forecast: Slim Possibility

A.J. Soares deserves more credit, both at the local and national level. As the only defender to play every minute this year, Soares has been a crucial part of the team's success. Soares and the shifting back line have recorded four shutouts and a goals-against average of 1.67. Soares has also chipped in on the attacking end by scoring a goal against the Philadelphia Union in week 11. Forecast: Slim Possibility

Bunbury was brought in as a forward that could help fill the void left by Juan Agudelo. The former Sporting KC player struggled in the center, which prompted a move to the flanks. Here he has shined, offering a career-high three assists. Bunbury has also contributed two goals, while showing defensive prowess. Forecast: Slim Possibility

Mullins' emergence has been a huge benefit for the Revs. After being introduced to the starting lineup as a target forward, Mullins became the second rookie in league history to score in four consecutive games. The two-time MAC Hermann Trophy winner simply makes the attack better as evident by the fact that the Revs have scored 14 goals in the four games he has started. It will probably be difficult for Mullins to earn enough votes to get an All-Star nod, but he could end up being the Rookie of the Year. Forecast: Very Slim Possibility

While fan voting will take place until July 11, the final game day roster will not be announced until July 19 or 21. On August 6, the MLS All-Stars will face against Bayern Munich at Providence Park at 9:30 pm. Revolution fans should always be rooting for one of their own to get the recognition (and money) that comes with being named as a MLS All-Star, but this year is slightly different because there are several legitimate contenders. The question is, who, if anyone, will be named an All-Star?

Load the ballot box and cast your votes!