The Breakers have a difficult road test to open the NWSL season, facing Alex Morgan and the Portland Thorns. Tom Durkin and rookie Stephanie Verdoia talked about the fixture ahead of the trip.

The Boston Breakers play their first game of the season against the Portland Thorns on Saturday at Providence Park. Last season the Breakers went 2-0-1 against the Thorns overall, with dramatic hat tricks for both teams and an outstanding performance in the first match by rookie Jazmine Reeves.

Another rookie hoping to make a similar impact this season is new signing Stephanie Verdoia. At practice before flying out to Portland, Verdoia said she was aware of the "hype around the city and the team" and was eager for the amazing atmosphere. She welcomed going into a pressure-filled environment and called it a "great challenge" for their first game. 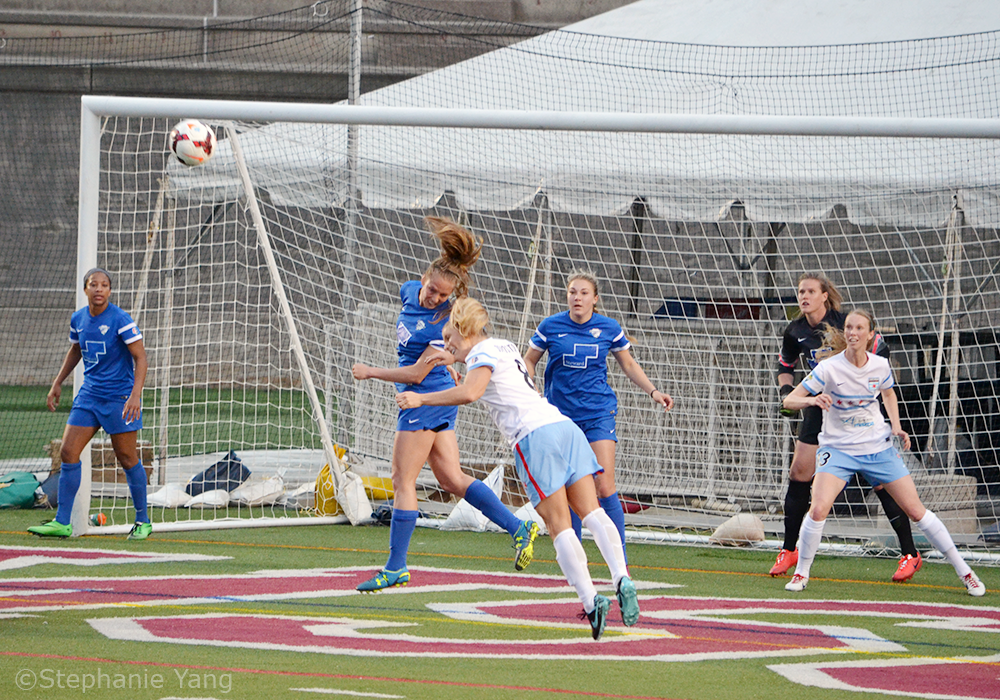 Verdoia said that being ready for the challenge of adjusting from the college game to becoming a pro helped ease her transition. She acknowledged that the level of play was initially much higher and more demanding than what she was used to, but welcomed the work. Getting called up to the USWNT U-23s for their recent tournament in La Manga just before preseason was helpful in preparing her and put her "in a good environment to succeed." Verdoia said that Coach Durkin intends for her to play as a 10, and that she feels comfortable there, but will play anywhere she is needed.

Durkin feels that the Breakers match up well with Portland, but is keeping an eye on new players to ensure they aren't overwhelmed by the circumstances. He said the team would be smart about its defending, not just from the back line, but from the forwards.

The Breakers will need to tighten up their defense with Alex Morgan returning to the Thorns after national team duty. The Thorns are without forwards Christine Sinclair, Jodie Taylor, and Genoveva Añonma though, which may narrow down the focus of their attack and allow Boston to concentrate on containing Morgan without spreading themselves thin elsewhere.

Boston's back line comes into this season with at least some experience playing together from last season, while its midfield and attack are almost completely brand new. So far Coach Durkin seems to want to play with a lone striker, while his midfield presses hard and high. Whether this creates enough pressure on Portland's defense to open up seams for the likes of Steph McCaffrey or Morgan Marlborough remains to be seen.

Likely starting midfielders Suzane Pires and Rafinha will need to find Kristie Mewis and Ketlen Wiggers to use the full width of the field and avoid roadblocks like Portland's McCall Zerboni and Allie Long. The Breakers saw some decent combination play around the box during preseason, but as has been noted by many teams in the league, preseason play is not a definitive indicator of in-season performance.

Whatever the game plan, Durkin was unfazed by the prospect of returning to Providence Park, which will no doubt be filled for Portland's first home game.  "Pressure can really help you to focus," he said. "You want to rise to the occasion so that the big crowd can energize them. It's a great place to play. [Portland] is the epitome of professional soccer."