Looking to move up the ranks, and overtake eighth-place Sky Blue F.C., the Breakers will embark on a seven game road trip, beginning at Yurcak Field in Northern New Jersey.

Throughout the 2014 season, the Breakers have struggled to develop an attacking identity. Now, after a lifeless 2-0 loss to Seattle, an even greater truth seems clear: the Breakers lack any identity. On Thursday, Head Coach Tom Durkin employed an attack-heavy 4-2-4 formation, though his club failed to break Seattle's stingy back line. Now 10 points out of playoff contention, the Breakers will need an immediate fix to return to relevancy.

Once a premier NWSL side, and a team many thought would take home the 2013 crown, Sky Blue F.C. has fallen from elite status. Before drawing with Chicago on June 15, the team scored just two goals in its previous four matches, a trend that has hampered Jim Gabarra's club all season long. Sky Blue will need a stronger presence from forward Monica Ocampo (2 goals, 12 appearances) and rookie Maya Hayes (12 appearances, 1 goal) to jumpstart a punchless attack. 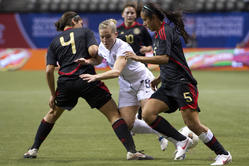 
On Sunday, the Breakers will welcome the return of international players Kristie Mewis, Heather O'Reilly and Lianne Sanderson, who missed Thursday's loss for a pair of international friendlies. But will their presence truly help? The Breakers have won just one match with their "superstars" in the Starting XI, a gutsy 3-2 victory over weekend foe Sky Blue. In the April matchup, Lianne Sanderson scored a pair of goals and pestered Sky Blue's back line from start to finish, earning NWSL Player of the Week Honors. Since that time, the British International has added two additional tallies, though rookie Jazmine Reeves has done all the heavy lifting. Who will emerge as Tom Durkin's true difference maker? Somebody will have to step up in Boston without forward Lisa De Vanna, who leaves Durkin's roster with a lack of attacking experience. Reeves, Nkem Ezurike and Mollie Pathman serve as likely candidates, all of whom will need to recover from a disappointing loss to Seattle.

Now more than halfway through their 2014 campaign, Gabarra and Sky Blue F.C. face a similar dilemma: who will emerge as the team's true star? Though rookie Hayes has shown signs of brilliance, she appears a season removed from true stardom. Ocampo, who scored eight goals in 15 appearances last season, has also failed to meet expectations, forcing Gabarra to rely on midfielder Katy Freels for offensive production. After scoring just 13 goals in 13 matches, the worst spread in women's soccer, Sky Blue will need to acquire (or develop) a potent striker to turn their 2013 campaign around.

In a battle of league's bottom feeders, look for the Breakers to build momentum for a late-season run. A dominant victory just may help Durkin's side develop the identity they so desperately need.