After her fellow attackers turned in a quiet May campaign, rookie Jazmine Reeves saved an otherwise disappointing month, collecting a hat trick, assist and raucous celebration from Boston supporters.

For the second month in a row, the Breakers stumbled through several discouraging performances, only to end the month on a glorious high. In April, midfielder Lianne Sanderson led the charge; in May, rookie Jazmine Reeves followed suit, bagging a trio of goals, adding an assist, and guiding her club to an unexpected 4-1 victory over the defending champion Portland Thorns.

Through the first four matches of May, however, Reeves hardly made a memorable impact, contributing a combined 86 minutes while totaling zero shots on goal. Unfortunately, Reeves' teammates failed to impress, too, completing a largely-forgettable month. 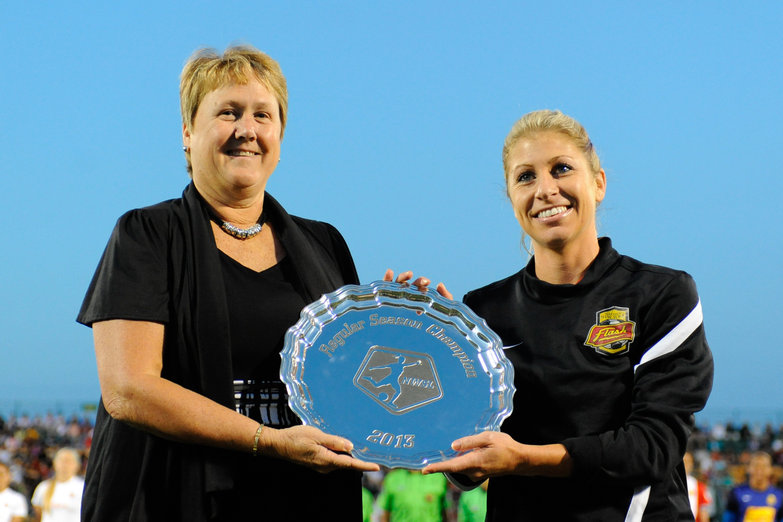 ESPN and the NWSL have signed a landmark TV rights deal that will see the women's league have regular-season matches broadcast on ESPN2 and ESPN3, and the playoffs and championships will get TV treatment as well.

On Wednesday, Reeves helped generate a lone bright spot, scoring her first career goal--and her second, and her third--during the Breakers win over Portland. And while you may disagree with our decision to award Reeves based on a single standout performance, hold tight--we believe she's worthy.

With four consecutive losses to their name, and with a full-third of the season behind them, the Breakers desperately needed an unsung heroine. Insert Reeves, a high-energy, goal-scoring rookie who earned just two starts in the month of May. Her dominant performance offered a glimpse of her play-making abilities, knack for finding the net and, most importantly, starting capability. Reeves' three goals alone serve as a team high, while fellow rook' Nkem Ezurike holds the only other goal by a forward.

As of Wednesday, Reeves has accomplished more than any other forward on Head Coach Tom Durkin's roster, making his pending decision an easy one: start Reeves and reap the rewards.

Reeves will, in all likelihood, earn a start on Sunday, pairing with one of several capable forwards. We have no reason to believe that she will maintain a comparable pace, though we do have reason to believe that she will serve as the attacking piece Durkin so desperately needs. Even in limited minutes this season, Reeves has shown that a breakout senior campaign with Virginia Tech served as anything but a fluke, despite the words of some critics. Her third goal--resulting from a crafty cut and quick shot on frame--highlights this truth better than any other.

So, how does Reeves fit into Durkin's long-term plans? Only time will tell, though at this point, she seems capable of controlling her own destiny. If Reeves enters Sunday's match with a similar tempo, grit and nose for the goal, Durkin will continue to look her way, providing the freedom to develop a memorable rookie campaign. True forwards Lisa De Vanna (4 appearances, 0 goals) and Katie Schoepfer (4 appearances, 0 goals) drastically help her case. We have only seen the beginning.

What about you? Agree with our analysis? Think we overlooked a standout May performer? It's your turn: vote below!