The Breakers struggled down the stretch in 2013, finishing in fifth place while failing to earn a post-season berth. The Bent Musket breaks down the 2014 squad, providing analysis and projections for the 2013 off-season.

The Breakers wasted little time creating off-season noise, using a September trade to acquire Seattle Reign midfielder Kaylyn Kyle, who will immediately compete for a starting role. Without question, new Head Coach Tom Durkin will continue to add pieces, shoring up a Boston team that finished six points shy of the playoffs last season. Where do the Breakers need help? The Bent Musket breaks down the women in blue, position by position.

Lock: Alyssa Naeher. Although the Penn State product battled injuries in 2013, she made sure to take advantage of healthy starts, leading the Breakers to six results in eight matches while amassing a 1.22 goals against average. Expect Naeher to start out of the gate in 2014. 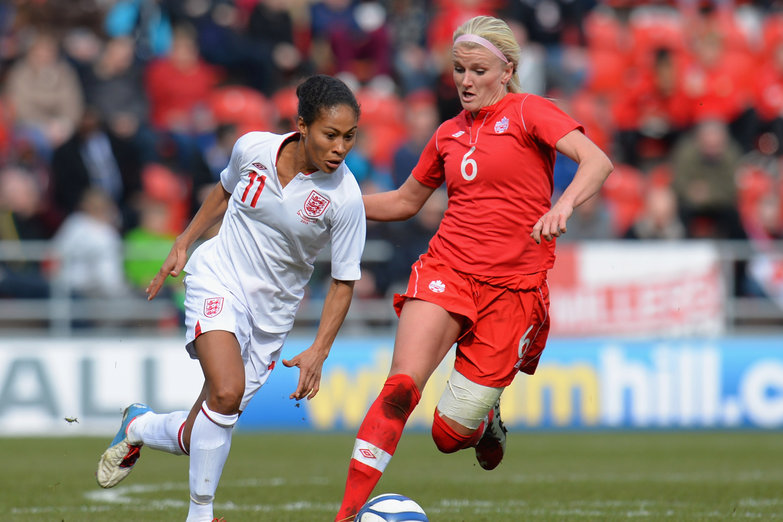 Projection: Third-string goalkeeper Cecilia Santiago, who earned a pair of wins in 2013, seems poised to claim the backup spot after teammate Ashley Phillips departed in early September. Durkin's side will inevitably add a third keeper, though don't anticipate a headline-making acquisition.

Lock: Cat Whitehill. The Captain and Interim Player Coach led the Breakers with 1,978 minutes played, solidifying her spot as the team's most consistent defender. Expect more of the same in 2014; Whitehill will serve as a stalwart starter along Boston's back line.

Projection: If Rhian Wilkinson returns as a defender next season - the Canadian international plays as a natural midfielder - the Breakers will benefit from five strong options along the back line. Durkin's side may look to add depth, though the pool of competitors for the Starting XI seems set.

Projection: The Breakers will boast an immensely talented midfield next season, though depth will present a major concern for O'Reilly's crew. Expect Durkin to add at least one midfielder before the season begins, providing competition and insurance in the middle of the field.

Lock: Sydney Leroux. The speedy striker collected 11 goals in limited action last season, developing into one of the premier goal scorers in American soccer. Expect the U.S. International to compete for the scoring title in 2014.

Projection: Durkin may decide to send at least one forward packing this off-season, creating room to add depth elsewhere. Prime candidates include Australian International Kyah Simon, who underwhelmed with three goals in 17 matches last season, and Penn State alum Katie Schoepfer, who followed up a stellar 2012 campaign with a quiet 2013 season (two goals, one assist).

Just a few weeks into the 2013 off-season, the Breakers appear just a few pieces away from a 2014 playoff run. Depth will undoubtedly serve as a top priority for new Head Coach Tom Durkin, though the core of this Breakers squad - featuring Leroux, Sanderson, O'Reilly, Kyle and Whitehill - provides talent from top to bottom.

Expect a series of subtle-yet-key moves as Durkin's off-season continues.