On Tuesday, the Breakers acquired Seattle midfielder Kaylyn Kyle in exchange for veteran defender Carmelina Moscato. The Bent Musket breaks down the transaction, joining forces with Sounder at Heart to offer expert insight and analysis.

The new-look Breakers have transitioned into the off-season with pace, confidently waiving goalkeeper Ashley Phillips and defender Jo Dragotta while acquiring midfielder Kaylyn Kyle from Seattle. On Friday, The Bent Musket met up with Josh, Seattle Reign correspondent from Sounder at Heart, to discuss Kyle's transition to Boston.

Josh and the Kyle-Moscato Transaction 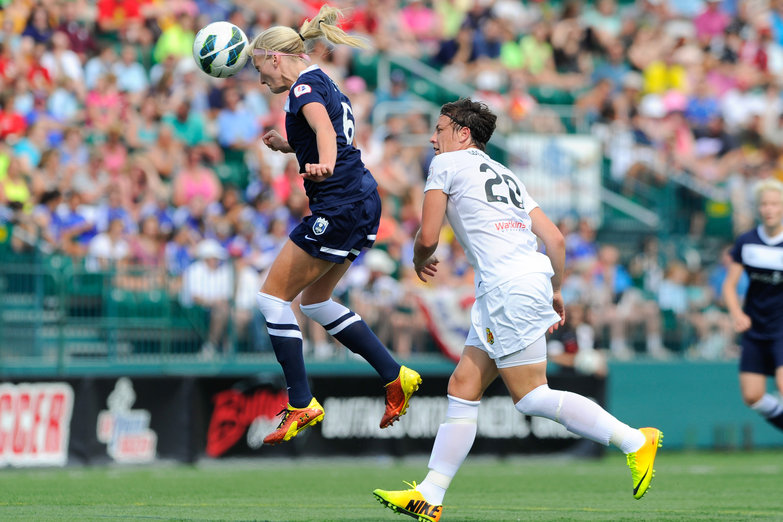 "Kyle wasn't actually a midfielder for the Reign outside of the first few matches of the season.  We learned early on that the defensive line was very thin and we were stacked in the midfield with Jess Fishlock, Keelin Winters, Kate Deines, Teresa Noyola, Christine Nairn, and eventually Megan Rapinoe.  So a few games in Kyle bit the bullet and took over one of the center back positions...She is already a more defensive oriented midfielder and her size probably helped; she was one of the taller players on the team."

On Seattle's decision to part ways with Kyle:

"Kyle put in a good year of service here, but I don't think she's a natural center back and I doubt she has any aspirations to move there permanently for either club or country. Even though she was 4th on the team in minutes this year, Kyle didn't really have a future as a defender (assuming the team focuses on fixing that in the offseason) and we still have the same glut in midfield, thus the move to get a natural center back (Moscato) in the trade."

"I can say that Kyle was one of my favorite players on the team, just based on her attitude and leadership on the field. Being willing to change positions for the good of the team is evidence of that.  We struggled with penalty kicks early in the season and then she took over taking them and we didn't miss another one this season.  As a midfielder, she's definitely more of a holder who can mark opposing attacking midfielders and distribute the ball up to the attack.  I can't recall her ever getting more forward than about 2/3 up the field except on set pieces, so I wouldn't expect her to crash into the box."

Though the Breakers and Reign struggled from similar deficiencies in 2013 -  their respective back lines failed to impress during the season's early stages -  midfield never represented the Breakers' deepest unit. In fact, before the acquisition of Kyle, the position seemed scarily thin, with Maddy Evans, Joanna Lohman, Mariah Nogueira and Heather O'Reilly making up the position's core; natural defender Rhian Wilkinson served hybrid duty in late 2013. Kyle's 1,752 minutes last season (19 starts) would have placed her above all midfielders except Lohman.

By adding Kyle, a natural leader and starting XI hopeful, the Breakers' can run with two play-making midfielders (O'Reilly, Lohman) in front of the Canadian International, who will serve as the unit's defensive mastermind. Expect Kyle to immediately benefit the Breakers' back four, tracking back with poise to take pressure off of center backs Cat Whitehill and Kia McNiell. The result: more room for Lohman and O'Reilly to combine with talented forwards Sydney Leroux and Lianne Sanderson, providing the balance Whitehill's crew so desperately needed last season.

Moscato made little impact last season, but used her uncanny leadership abilities to benefit her east coast side. The addition of Kyle  -  an exceptional leader and stalwart starter  -  provides value in both categories, making GM Lee Billiard an unrivaled winner.

Special thanks to Josh at Sounder at Heart for providing west coast trade analysis.