After overcoming a difficult June without International forward Sydney Leroux, the Breakers have witnessed the emergence of a national superstar. On Saturday, Leroux scored her ninth and tenth goals of the season, guiding the Breakers to a 2-0 victory over second-place Portland.

From the opening moments, the Breakers asserted control, using their attacking speed to run at Portland's sturdy back line. In the 11th minute, Boston midfielder Heather O'Reilly settled an offensive thrown-in before slotting a pass to Leroux in open space. From the top of the arc, Leroux ripped a one-time shot low and wide, emphatically beating Thorns goalkeeper Karina LeBlanc. 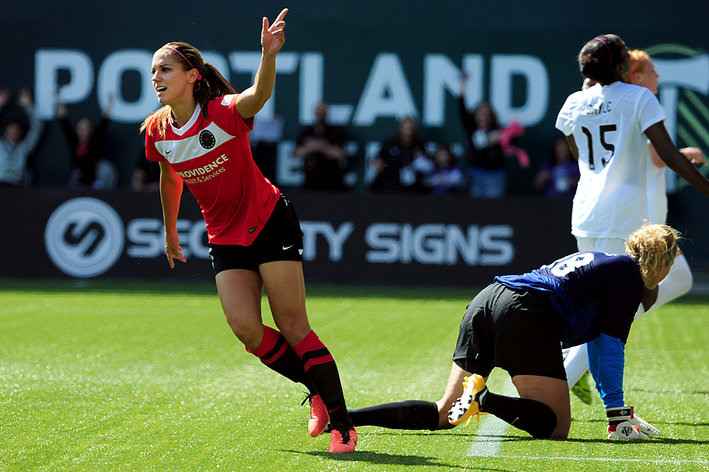 News, previews, recaps, and analysis about the Boston Breakers and the National Women's Soccer League

For the Breakers, several opportunities ensued, including a 19th minute point-blank shot by Heather O'Reilly that ended on LeBlanc's chest. Finding comfort in their attacking third, Boston again broke the Thorns, using a counter-attack to silence JELD-WIN field. After her teammates cleared a broken cross, O'Reilly played a perfectly paced through ball to Leroux, who raced past Portland defender Kat Williamson. Alone and just inside the 18-yard box, Leroux turned, placed a shot on the far post, and gave the Breakers a two-goal lead.

Although Leroux's first-half productivity would stand, the Breakers found themselves on the defensive for the majority of the second 45. In the 66th minute, Thorns forward and Canadian International Christine Sinclair chased a dangerous through ball into the box, only to be turned away by Breakers goalkeeper Alyssa Naeher, who read the threat with confidence. Just moments later, forward Tiffany Weimer took a skillful touch toward from the endline into the penalty area, only to sting a lofting shot into the waiting arms of Naeher.

In the 80th minute, Weimer again challenged the Breakers back line, poking a shot on frame from seven yards out. Naeher again failed to break, swallowing the opportunity and quieting the anxious crowd of 12,436. Minutes later, focal point forward Alex Morgan tested Naeher for the first time, forcing Boston's goalkeeper to tip a high, diagonal shot over the crossbar. The disappointment on Morgan's face told the story; the Breakers had stunned Portland at home.

Now unbeaten in their previous three matches, including dominant wins over the top two teams in women's soccer, the Breakers will aim for consistency in next week's road match against top-ranked Sky Blue FC. With continued defensive chemistry and the rise of a goal-scoring icon, the Breakers (5-5-4, 19 Pts.) now stand within three points of a playoff berth, a significant threat to table's top teams.