Just hours before a memorable 3-2 win over Sky Blue FC, the Breakers added defenders Carmelina Moscato and Jazmyne Avant to sure up an inconsistent defensive unit

After surrendering a late lead against visiting Seattle Reign on Wednesday, Breakers' Captain Cat Whitehill expressed concern over the state of her back line. "We have yet to play two games with the same back four, and that's a serious issue," she responded. "With people coming in an out, it kills our chemistry; there are times when we're definitely on different pages."

Avant's inclusion in Sunday's starting XI surprised many, though the newly acquired defender made immediate contributions on both sides of the ball. In the 29th minute, Avant used her speed to move up the right side, sending a flawless cross onto the foot of Sydney Leroux, who buried the assist. 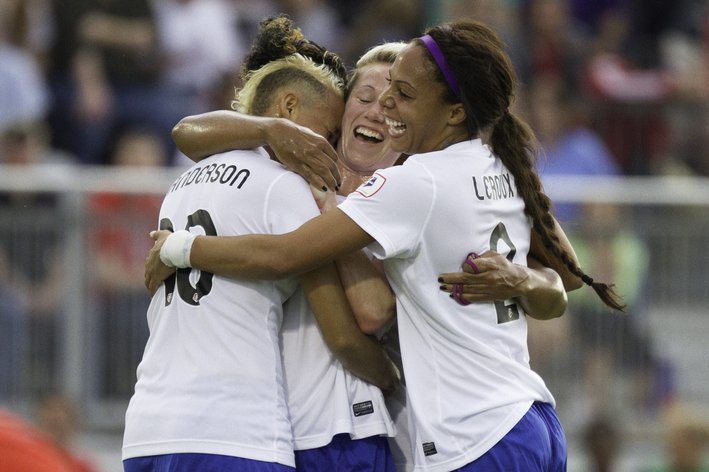 Goals from Leroux and solid defending from newly-signed defender Avant made the difference in 3-2 a victory.

"Avant's greatest asset is her speed," added Stumptown Footy staff writer Jonanna Widener, who serves as the Thorns correspondent. "She has some serious wheels and, being somewhat attack minded, can be really good moving forward."

According to Widener, the Thorns released Avant to make room for defender Casey Ramirez, who joined Portland from Danish side Elitedivisionen club Fortuna Hjørring. Widener also attributed the move to a series of early season struggles, forcing Avant out of Portland's defensive rotation. "Signed as a discovery player, Avant didn't play well in the Thorns first public preseason game," Widener concluded. "Lately, however, she had been exhibiting more consistency than earlier in the season, when she tended to get caught out of position."

After Sunday's standout performance, Cole provided nothing but praise for her 23-year old defender, again turning toward Avant's ability to carry the ball upfield. "Avant is a fantastic young player," Cole began. "She has speed in the back and gelled well with our back line today. She's an important pickup going forward."

Moscato, who joined the Canadian National Team as a 17-year old in 2002, will provide a sense of veteran leadership beside the younger Avant. Waking the Red staff writer John Leung described the defender as "an absolute rock in the back." He continued to applaud Moscato's veteran presence in light of a youthful Canadian side, believing she "had been through the wars on the big stages" and that "she knows how to handle the big game situations, and can definitely impart some of that wisdom on the next generation."

Cole's take only seemed to solidify Leung's words. "Moscato is a tremendous coach on the field...She's already making a difference in our locker room."

Commenting on her quick east-coast transition, Moscato expressed excitement about joining a welcoming Boston side. "I'm really happy to be here," she began. "For me, it's a new opportunity, and hopefully in same way or another, on or off the pitch, I am going to contribute to the Breakers' goals this season."

"I have a lot of experience - I'm a veteran now, though its weird to say out loud - so I've been through tough seasons and tough games. Right now, about helping in any way that I can."

After finding long-awaited chemistry on Sunday, the Breakers will look turn in a second consistent match on Wednesday against Seattle Reign FC. The match will kick off at 10:00 pm ET at Starfire Stadium in Tukwila, Wa.