Behind thrifty goalkeeping from Ashley Phillips, the Breakers extended their unbeaten streak to four matches after a scoreless draw with top-ranked Sky Blue FC

In a match that featured streaking forwards Monica Ocampo and Sydney Leroux, defensive play stole the spotlight, leading the Breakers and top-ranked Sky Blue FC to a 0-0 draw.

Early on, a slick surface at Yurcak field contributed to strong attacking play from both sides, highlighted by a dangerous cross from Sky Blue forward Danesha Adams. Fresh off a broken corner kick, Adams slotted a low pass onto the foot of Lisa De Vanna, only to watch Breakers backup goalkeeper Ashley Phillips make a sprawling reaction save. Moments later, De Vanna and Adams connected again, as Adams played a brilliant through ball over the top to De Vanna. With Phillips charging out to cut down her angle, De Vanna took a heavy touch around the goalkeeper, only to watch her opportunity travel over the end line. 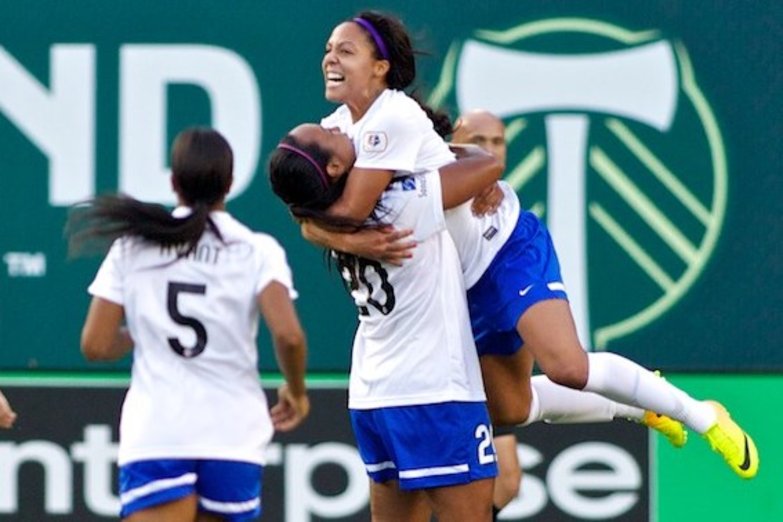 The Boston Breakers will put their three-match unbeaten streak to the test when they face off against Sky Blue FC on Saturday night.

On the opposite end of the field, Breakers forward Sydney Leroux and midfielder Heather O'Reilly continued to combine well, incorporating running mate Lianne Sanderson during several promising opportunities. In the 39th minute, Boston forward Kyah Simon found herself with space on the right side before stinging a shot high and toward the near post. Sky Blue goalkeeper Brittany Cameron made an outstretched saved to fend off a dangerous shot from Simon.

The second half of Saturday's match provided more of the same, as both sides continued to threaten with creative opportunities. After a run of deadlocked midfield play, Sky Blue midfielder Katy Freels took a daunting shot from distance, forcing Phillips to lunge upward and parry Freel's shot over the crossbar. Just minutes later, Phillips rose up again, stretching horizontally to emphatically save a point-blank header by De Vanna.

In the waning moments, both teams contributed a parting threat, beginning with a final connection between O'Reilly and Leroux. With a full head of steam, O'Reilly played a gorgeous ball into the middle, which bounced just over the outstretched foot of Leroux. Less than a minute later, Freels ran onto a deep cross and attempted to redirect the pass into the back of the next. Her touch, however, slowly rolled into the waiting arms of Phillips.

With enough opportunities to earn three points at home, Sky Blue failed to break Boston's sturdy back line, falling into outstanding play by Breakers goalkeeper Ashley Phillips. A second consecutive complete performance by Boston's back line enabled the Breakers to extend their unbeaten streak to four matches, moving within three points of Western New York and the final playoff spot.

The Breakers host Alex Morgan and the Portland Thorns; game kicks off at 4:00 p.m. at Dilboy Stadium in Somerville, Mass.