Riding an impressive goal streak from NWSL Player of the Week Sydney Leroux, the Breakers will visit familiar foe Sky Blue FC, who will feature Monica Ocampo, a forward with a streak of her own.

Despite a less-than-stellar weekend trip to Seattle, the Breakers have found a new sense of consistency, earning seven points in their previous three matches. In simpler terms, it’s a good time to jump on the Boston bandwagon. The Breakers have found attacking consistency in goal-scoring phenom Sydney Leroux, and the rise of speedy defender Jazmyne Avant has worked to solidify Boston’s shaky back line. Only four points separate the Breakers (5-5-4, 19 pts.) and Western New York (6-3-5, 23 Pts.), placing the final playoff spot within reach. 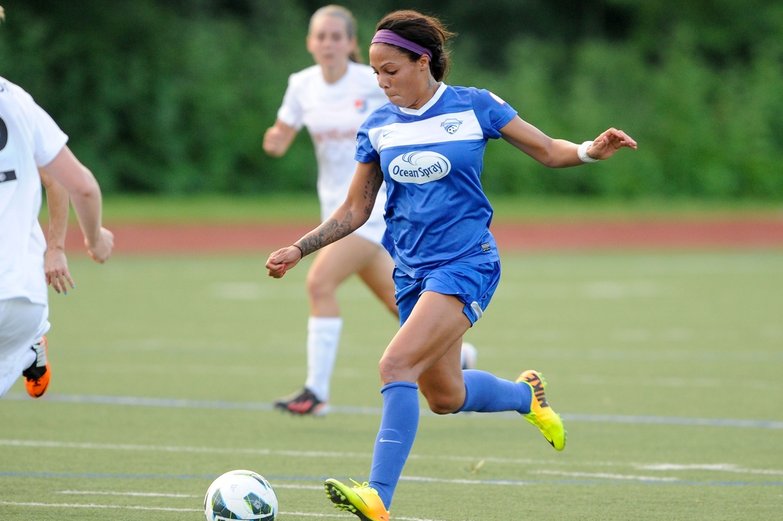 After an excellent three-match run that saw her rocket to the top of the NWSL scoring charts, Sydney Leroux was honored for her accomplishments and named Player of the Week.

Just over a week ago, Sydney Leroux tamed Sky Blue FC with a pair of goals, though Monica Ocampo’s crew audibly responded with a 1-0 win over Washington. The victory strengthened Sky Blue’s spot atop the NWSL table, benefitting from Boston’s rout of second-place Portland (8-4-2, 26 Pts). Now entering the final third of the 2013 season, Sky Blue (9-3-3, 30 Pts.) has asserted itself as the premier club in women’s soccer, using steady defense and a potent attack to consistently earn results.

On Saturday, all eyes will focus on superstar forward Sydney Leroux, who has towered over NWSL defenses in recent weeks. Her five-goal, three-match stretch distanced the Breakers from the bottom of the table, leading Heather O’Reilly and co. back into the playoff picture. The Breakers’ formula for success seems simple: strong combination play by Leroux and O’Reilly - paired with consistent defending by captain Cat Whitehill and newcomer Jazmyne Avant - earns three points. If the Breakers have their way, as they did in the team’s previous matchup with New Jersey’s finest, expect the streak to continue.

For Sky Blue FC, production has arrived on the foot of forward Monica Ocampo, an unsung heroine on a squad with considerable talent. Ocampo used a goal and an assist to oust the Breakers in a 3-2, mid-June victory; two weeks later, the Mexican International erased a 2-0 deficit with a pair of second-half goals, including an 85th minute equalizer against Kansas City. Ocampo extended her goal streak to four games last week, adding a goal against Boston and a game-winner against Washington. Sky Blue fields a team with flashier players (see Christie Rampone and Kelly O’Hara), though Ocampo has continually become a difference maker for her top-ranked squad.

In a matchup that includes two red-hot forwards, expect consistent defensive play to make the difference. The Breakers have accomplished this task as of late, though Sky Blue has done so throughout the course of 2013. A battle of mainstay vs. newcomer will ensue; look for Leroux and O’Reilly to combine well yet again, using the support of Avant and goalkeeper Alyssa Naeher to earn a result on the road.