The annual SBN Mock Draft is here! How did we do for the Revs this year? We hope you like centerbacks.

This week is one of the happiest days of the MLS offseason. The 2017 SB Nation MLS Mock Draft will be published tomorrow and you should go check it out when it gets published. Don't forget to check out the rest of the SBN MLS sites for more detailed analysis for their picks as well, as the big mock draft won't go into that much detail.

For the second straight year I got to put on my front office hat and try and add legitimate talent to the New England Revolution roster. As always, I think I did really well.

The rules are pretty simple: no trades, we're only picking the first two rounds and we used the current draft order that is sure to be changed during/right before the draft, likely rendering this fun and entertaining exercise useless by Friday. So, be prepared to scroll down a bit, the Revolution have the 20th and 31st overall picks. 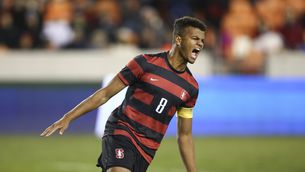 Nick Hemming takes a look at some of the prospects rated near the 20th pick in this year's MLS SuperDraft, including three centerbacks like Brian Nana-Sinkam from Stanford pictured above.

The Revolution have Colorado's natural selection following the Jermaine Jones trade while Columbus has the Revs natural pick at #9 after the Kei Kamara trade. The two top centerbacks in this draft, Miles Robinson of Syracuse and Brandon Aubrey if Notre Dame are the two players New England would have to move up to get, as they won't fall this far. However, there's a really solid group of centerbacks after those two as well, and I had a few options late in the first round.

However, with my first pick of the year as the New England front office, I played it a little safe. Schmidt is a defense first type of player, who is smart tactically and doesn't make a lot of mistakes. With the Revs defense woefully thin right now, if Schmidt is called upon to play serious minutes as a rookie I'd rather have someone who's comfortable on the field than someone who might have more upside but is a little more of a project.

Schmidt was a four-year starter for the Washington Huskies, and the Pac-12 has some of the best offensive teams in the college game. Schmidt was slated to go 10th to the Portland Timbers by Ives Galarcep in his latest mock draft and 13th to Real Salt Lake by Matthew Doyle on MLSSoccer.com. So even late in the first round, there's still going to be a few first round talent defenders on the board for the Revolution, and Schmidt might be a safe pick but he's also a solid one at this point in the draft. 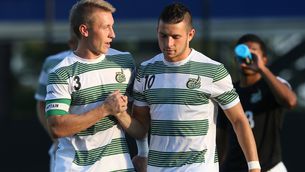 So with centerback shored up in the first round, do the Revs look elsewhere in the second round? Nick Hemming with more prospects for Friday's MLS SuperDraft.

Strangely, I debated between Schmidt and Abubakar at the #20 pick, mostly because it should be a rule that all players with the first or last name of Lalas have to play in the Revolution backline. Abubakar could be the better prospect, and surely has the physical tools,  traits and speed for MLS. However, despite being rated highly, I think this comment from Doyle, who has Abubakar going 10th to Portland, might have been one of the reason's Lalas fell in our mock draft.

"The questions about him are almost exclusively around his skillset. It's not so much his first touch -- though that can come and go -- as it is his ability to pick the right passes out of central defense." -- from Matthew Doyle's Mock Draft 1.0.

So while I played it on the safer side with my first pick and chose Schmidt, I was happy to get my second choice a half round later and much to the dismay of everyone else in the draft room. If Abubakar falls this far in the draft, he could be a steal despite any lack of polish he might have as a rookie. Give Lalas a year practicing with Jose Goncalves as an understudy learning JoGo's patented shielding move and the Revs could have a solid contributor or even a starter down the road.

I really only ever considered one position for the Revs in this draft, and spent my time almost exclusively looking at the class centerbacks for this draft. Some of that research might go into a post later this week and while I'm not an expert in the college ranks, I think it's a very strong defensive class this year.

Even as I was waiting for my pick, and seeing other centerbacks like Walker Hume from North Carolina and Brian Nana-Sinkham from Stanford go right in front of the Revs selection, there were still options. Schmidt ended up being the choice for me in the first round, but Francis de Vries of St. Francis (PA) went early in the second round. Jordan Wilson of Kentucky and Jakob Nerwinski of UConn (who I have as a right back) went just a few picks after I selected Abubakar in the second round, so there's still talent and value to be had from the centerback position at both of these picks for New England.

So, how did I do? Is there a player I missed out on? Is there a player you'd like to see the Revs draft in the first or second round that isn't a centerback? The comment section as always, is yours. Be sure to check out Nick Hemming's articles as well in the sidebars above for more prospects in this year's MLS SuperDraft, especially the 20th pick which focuses on three of the centerbacks I didn't draft but had my eye on.