No seriously, can we not have the red vs. burgundy matchup today? My eyes still hurt from last year.

Share All sharing options for: Know Thy Enemy: Three Questions with Abbie Mood of Burgundy Wave

In a match that had so much more hype months ago at the beginning of the season, when the New England Revolution traded Jermaine Jones to the Colorado Rapids, we're now left with the shell of what could have been an interesting East-West "rivalry" game.

Sadly, Jermaine Jones' injury struggles continue and while the Rapids are very much a part of the Supporter's Shield race the Revs are languishing near the bottom of the East. Did the Jones trade change the fortunes of these two clubs who play a similar style?

We chat with Abbie Mood of Burgundy Wave to get the other side of the Jones trade and try and figure out just how good this unassuming Rapids team can be.  Be sure to check out their site for my answers to their questions as well

TBM: Okay, I know it's going back a while, but what were your thoughts on the initial Jones trade right before the season? Jones has been limited this year with injuries but what kind of impact has he made on the Rapids in 2016?

AM: JJ is a bit of a tense topic around here right now, because of his injuries, and lack of playing time for the team (he's only been in 8 games this year). Many fans believe that he does make a huge impact on the game and his absence is a big reason why the Rapids' offense has been stalled lately. With Jones, the team was 5-0-3, with 10 goals (3 of those were his). The Rapids only have 28 GF all season (second lowest in the league). Of course, it's not as simple as looking at goals, but it's clear he has an impact on the offense. Not to mention that he draws attention when he is on the pitch, leaving other guys open to make something happen. 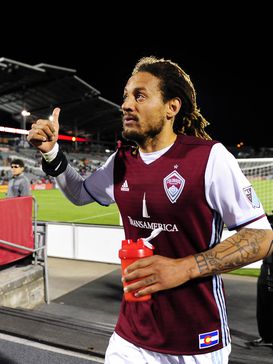 So Jermaine Jones won't be playing for the Rapids and Watson and Kamara are unavailable for the Revs. Nick Hemming with these and more in his storylines to watch.

But when the Rapids first signed him, everyone was pretty psyched (and our Asst. Ed. RapidsRabbi actually called it before it happened). Bringing on Jones sent a message to the fans that the Front Office was trying to bring on some players that were going to have an impact on the team. It meant that the Rapids were trying to improve the team and gain back some of our trust. Everyone believed that the Rapids would be a better team with Jones on it, and that belief has continued throughout the season so far. We want him back out there.

TBM: The Rapids are five points back of FC Dallas with two games to play, are they still Supporter's Shield contenders? What do they need to do to keep pace with the top of MLS?

AM: I think every Rapids fan is hoping they can still pull it off, but to be honest, it is going to take some work. It is definitely in our favor that we have two games in hand, but we have some tough games coming up, including games at FC Dallas and Portland. The Rapids need to figure out how to get the offense going without Jones, because I don't think we can count on him to be healthy.

Since the MLS break in June, the Rapids have been 2-2-5, averaging 1 GF and 1.2 GA (though a terrible 5-1 loss vs. NYCFC boosted the GA considerably). They have to start scoring goals and getting three points instead of just one (or none).

TBM: Looking at the Rapids, this seems to be a team that scores by committee rather than leaning on one player to generate the offense. Is this a benefit for the Rapids this year or do they need someone to have a big end of the season?

AM: That's exactly right - the Rapids don't really depend on one or two stars to score, which is a blessing and a curse. It's a blessing in the sense that we aren't counting on one or two people to be "on" and to score, but it's a curse because we don't have any one we can count on to score. Quite a few people out there are upset that Kevin Doyle doesn't have more goals on the season (he has four), because the Rapids brought him in to score goals, and are paying him quite a bit of money to do so. In my opinion, the 4-2-3-1 system doesn't really suit him, and leaves him stranded up top. I think the Rapids need to change their tactical strategy.

Injuries: Jermaine Jones (knee), Marlon Hairston (day-to-day, lower body), and Sébastien Le Toux, who we recently acquired from PHL seems to have a recurring back injury, but I can't confirm that for the NE game.

We also have four players called up for their international teams: Shkëlzen Gashi, Mekeil Williams, Marco Pappa, and Tim Howard. I'm not excited about it. JJ was called up, but came back to rehab his injury in Colorado.

As far as a predicted lineup, our defense is probably going to stay about the same as it has been, except for the goalkeeper of course, but I have no idea what's they're going to do up top.