Torches and Pitchforks: The Aftermath of the Charlie Davies Trade

Losing Charlie Davies at the trade deadline will sting, but it will be worse if the Revolution don't add to the smallest roster in MLS.

Share All sharing options for: Torches and Pitchforks: The Aftermath of the Charlie Davies Trade

I know that everyone's first reaction earlier in the week was to grab their pitchforks and march towards Gillette Stadium. It's very natural to be upset at losing a beloved member of the New England Revolution when Charlie Davies was traded at the 11th hour to the Philadelphia Union.

However, I want to be very clear that when you're directing your anger towards the Revs front office, please do so properly. And do not be mad at Charlie ever, because he's Charlie Davies and he's the best. Even if a few nights a year we can't be openly rooting for him, New England will never truly root against him.

Because this is a rare event in sports, where a team decided to do something not in the best interests of themselves, but in the best interest of a player. And if we're being honest, if Charlie Davies did in some way ask for this trade and at the very least he did agree to it, with everything that Charlie has gone through this year and in his life he's earned the right to make a decision like this for him and his family.

And Brian Bilello and Mike Burns deserve credit for getting Charlie to his new team now, when it is best for Davies, as opposed to the offseason when it would be best for the Revs. New England is in the middle of a playoff battle, mired in the middle of the Eastern Conference standings with basically everyone else, and losing Davies now will not help that cause. Give credit to the Revolution staff for including Davies in the trade talks when they have no obligation to do so and as Bilello said to his recollection that this is a first for the club.

There's two quotes from the Revs' front office that are pretty telling to me about just how well the front office handled the situation, and no, it's not the awkward "You just traded the fan favorite who beat cancer! This team is the worst!" that was all over Twitter earlier in the week.

"When this was brought to us, we talked directly with Charlie. It was important to do what was right for Charlie and his family. If it wasn't right for them, we wouldn't have considered it," said Michael Burns in the team's press release. And this tweet from Bilello:

Very difficult for us. Key was making sure that it was something Charlie wanted for him and his family. Would never have done it otherwise

This deal was so unique and if we're being honest, handled about as well as it could have given the end result for New England. Obviously the fan reaction was going to be very negative as Charlie is basically a legend around these parts but that's why we need to take the soccer aspect out of this trade and focus on the personal, because that make far more sense for Charlie and why this trade works well for him.

The timing for this deal for the Revs is brutal for a variety of reasons. The Revs just got Charlie back onto the field and healthy for the first time in months and with the US Open Cup semifinals next week it could have been Davies starting up top for the Revs. With Juan Agudelo and Femi Hollinger-Janzen still on the mend the Revs technically do not have another true striker on the roster though Teal Bunbury would be the likely candidate to move up top if needed Off the field, well we all know the kind of year Charlie has had, so if he and his family are on board with the trade and want it to happen, there's no reason for the Revs to say no. 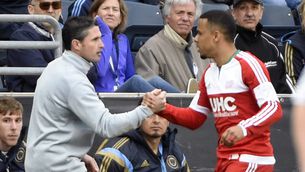 The Revs team president and head coach describe how the trade with the Union went down, and why Charlie Davies himself had a say in the proceedings.

Except for the fact the Revs have every reason to say from a pure soccer standpoint and they didn't. They should be praised for putting Charlie's interests and his family's above theirs, even if that means hurting the team on field, which this move certainly does. The Revs are losing a tremendous talent on the field and an inspiration off of it and the locker room surely will take a hit because of this trade. But the time to be mad at the front office is not right now.

Don't put those pitchforks down. At least not yet. Because now, the Revs front office has a tremendous problem. Essentially, the New England Revolution were sellers at the trade deadline, not exactly the position you want to be in when you're technically in a playoff position. While the Revs did make an earlier trade for Kei Kamara, they won't have the opportunity to use the assets in the Davies trade until the offseason because the transfer window is closed and no more player trades can be made.

Which means the Revs current roster stands at 24 active players, lowest in the league with the New York Red Bulls who have two players on the disabled list. Even if you counted Xavier Kouassi as #25, and I'm not since we know the likelyhood of him contributing this year is slim, the Revs would still have the smallest roster in the league. There are no outfield players to recall from the USL (apologies to Matt Turner of the Richmond Kickers), no players that have been gaining experience with a USL 2 team, what you see is what you have. This roster size is now egregiously unacceptable, and now the only chance the Revs have to add to the roster until the freeze date in September are through free agents.

Since the #MLS Trade deadline has passed, the #NERevs desperately need a free agent defender...where's Will Packwood?

I was kidding with that tweet, mostly, and I apologize for nothing. But the Revolution have been very cautious of who they sign from the international ranks abroad, preferring instead to add internationals already in MLS like Je-Vaughn Watson, Gershon Koffie and Daigo Kobayashi. Now the Revs are either going to have to add a few out of contract players or play the rest of the season with a short roster, and with Agudelo and Femi coming back from injury, the options up top behind Kamara are desperately thin right now.

It is probably next to impossible to find an out of contract striker at this stage of the international summer window with preseason tours already in full swing and most players probably already under contract. With no transfers allowed into MLS, the Revs can only add free agents, and I'm sure there are probably more than a few decent defenders out there who can possibly shore up this roster.

I am less worried about the offense than I am about the defense. I don't know if this team needs another centerback, or if Woodberry, Samba and Barnes, or even Watson, can figure out the final piece to the backline. The attacking talent the Revs have, even without Davies, is still very potent for an MLS side when it's clicking. Burns and Bilello deserve a lot of credit for building a solid roster and making moves for guys like Kamara, Koffie and Watson.

Now they have to make another one, in the worst of circumstances. They need to pull a rabbit out of the hat and impress the fanbase one more time with an acquisition and they have to do it soon. And like the previous additions to the team this year, the front office needs players who will make an impact, they need a proverbial extra base hit, probably two, in the ninth inning while losing. And it's not going to be easy, the international market isn't exactly an area the Revs have been hitting a lot of home runs in the past, hence why they have to be so good at getting value within MLS via trades, etc.

Our friend Matty Jollie is right when he says we can't evaluate this deal until the Revs get to use the stuff acquired in the Davies trade:

You can't completely analyze this trade until you see what the assets are turned into. Fact. https://t.co/msUDV55YI4

But that draft pick is still two years away and any trade sending that pick elsewhere can't be made until this winter. While the Revs front office can't work their trade magic again right now (and a 1st round pick and all the allocation monies for Davies is by far more than I would've thought Davies was worth under normal trade circumstances, Philly paid a deadline premium), the Revs can not sit on their hands after this deal for the rest of 2016. Someone must be added to help this team down the stretch and I don't think "Open Cup or Bust" is an appropriate slogan for the Revs season yet. But we can not give up hope of 2016, not yet.

This team is too talented to miss the playoffs and selling a key player at the deadline and then missing the playoffs will feel like a colossal failure for a team two years removed from an MLS Cup appearance. I know the Revs front office can't go out and make another trade to bring someone in right now, so we can't evaluate the Davies trade until that Union 1st round pick is made or sent elsewhere. My stance on the Revs front office as far as trades go remains unchanged, they are the best at working MLS deals and now warchest has been restocked and I fully expect them to use it at some point.

But the pitchforks are still assembled, and rightly so. But they should not be assembled because Charlie Davies was traded, but instead to ensure that an addition to the roster is made in 2016. Preferably soon too, lest I change my mind and grab my own pitchfork and join the masses. The Kamara trade back in May was a signal that Revs wanted to win now, the Davies trade, without a counter move, would go against that philosophy.

If they don't, well there's always a sale on torches and pitchforks in New England somewhere. And trialist Will Packwood stories to copy/paste write.