While Bob Lilley is renowned for setting up strong defensive teams, but he does not perhaps get as much credit for his nuanced tactical tweaks for specific opponents. These tweaks, lining his team up in a new 4-5-1 formation, paid dividends on Wednesday night in Ohio when the Rochester Rhinos earned a 1-1 draw against FC Cincinnati.

The Rhinos lined up with just four in the back (Bradley Kamdem, Vasilis Apostolopoulos, Joe Farrell, and Ryan James) rather than five, though ball-winner Wal Fall did drop back at times when Cincinnati was attacking. With Fall sitting deep, Kenardo Forbes was relatively free to spread passes around but was still responsible for defensive pressure, as well.

Sofiane Tergou, who scored two goals on Saturday against Pittsburgh Riverhounds, and Michel Guilavogui manned the flanks in midfield though the latter provided less defensive support. Utilizing his work rate and physical presence, Coach Lilley tasked Steevan dos Santos with a role in between the central midfielders and the lone striker. Christian Volesky played alone up top when Cincinnati was in possession but when the Rhinos won the ball several players surged forward.

Revs Loanees Close To Missing Out on USL Playoffs 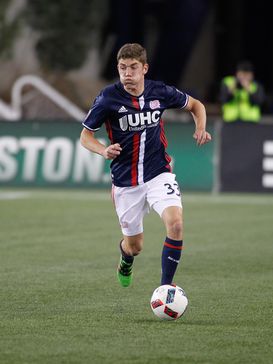 Revolution players haven't gotten a lot of minutes this year in Rochester, but they'll need to make a lot of appearances late in the season if they want to be eligible for the Rhinos playoff run.

The Rhinos created one of these instances in just the second minute. During an early Rochester attack, Forbes received a drop-pass just outside the Cincinnati penalty area. Cincinnati goalkeeper Mitch Hildebrandt pushed the Jamaican's heavy shot behind for a corner kick.

In the 20th minute, Tergou took a corner short on the left side to Forbes who returned the ball. Tergou then hit a right-footed cross into the middle that Hildbrandt came off his line to claim but flubbed his contact on the ball. Luckily for the home team, the defense was able to clear the danger after that goalkeeper mistake.

A couple mistakes in the back for Rochester, defenders had opportunities to clear but elected not to, provided a corner kick for Cincinnati. In the 28th minute the hosts took a corner short to left wingback Tyler Polak. The former Revolution loanee to Rochester sent left footed outswinging service into the area. Center back Austin Berry rose up above dos Santos, as Fall vacated the space at the top of the six-yard box, to meet Polak's cross. Rochester goalkeeper Tomas Gomez was wrongfooted on the play as Berry hit his header back in the direction that cross arrived.

After the goal, Rochester probed. In the 33rd minute dos Santos took a quick throw-in deep to Volesky. The forward has shown moments of brilliance but as Hildebrandt came out to close him down, Volesky took the ball off his chest and snatched a tight angle volley horribly high and wide of goal.

Just a minute later Fall played a good ball into Volesky's feet and the forward redirected the pass up to Tergou first-time. The intent was correct but Volesky's pass was slightly behind Tergou's run and the attacking midfielder was unable to hit an instep curling shot to the far post as he had against Pittsburgh on the weekend.

A rather unfortunate event developed in the 37th minute as Omar Cummings collided with Gomez. Corben Bone played a ball forward from deep on the right wing. Andrew Wiedeman flicked the ball towards Cummings with his head. As Cummings run onto the flick, Gomez came off his line and neither player made contact with the ball. The two banged knees together but Cummings then appeared to hyperextend his right knee.

Cincinnati's trainer was on the field performing lateral tests on Cummings before the pair exited the field behind Rochester's goal. As Cummings slowly made his way to the team's bench, the trainer signaled that he would be unable to continue. Based on the incident and the amount of time the trainer spent evaluating Cummings on the field, it was fairly obvious the forward suffered a serious injury but Cincinnati coach John Harkes did not have a substitute ready. While the home side temporarily played a man down, Rochester struck.

In the 41st minute left back Bradley Kamdem caused a bit of havoc attacking up the wing and set up dos Santos. Despite ostensibly playing in a back four, Kamdem got forward often and he put in a number on former Rhino fullback Pat McMahon. Rochester's Paris-born defender spun McMahon and centerback Berry who had pinched over the help. Having beaten two players, Kamdem looked up to find dos Santos open in the area. The big forward did well to curl a low shot around a pair of defenders and in at the near post. Hildebrandt, a quality goalkeeper by all accounts, was rooted to the ground on the equalizing goal, Duba's sixth of the season.

Just before halftime Kamdem nearly provided the go-ahead goal after dos Santos fed him the ball in space on the wing. Kamdem's service into the box flew over Volesky in the center but dropped for Guilavogui at the far post. With the ball bouncing up and just the keeper to beat, Guilavogui missed a chest-trap and had to chase the ball down before sending a cross into the mixer. The winger almost made amends by picking out Forbes at the opposite post but the side-volley hit outside netting.

The second half was a more tense and physical affair. Space that had been available on both ends of the field in the first half dried up and tackles came in harder on the second half. Jimmy McLaughlin was booked ten minute into the half and just a minute later Apostolopoulos got tangled up with Kenney Walker in the box on a Rochester corner kick but the referee opted for just verbal warnings.

Hildebrandt did well to push a Fall header over the bar on the ensuing corner kick in the 58th minute.

Coach Lilley introduced Mike Garzi in the 68th minute to replace Guilavogui and provide steel in midfield. Rochester made a similar defensive substitution in midfielder in the 82nd minute as Bakayoko Gaossou replaced Fall for his second appearance since signing with the Rhinos. Nearly his first involvement in the game was in a goal-mouth scrum that the officials appeared to misjudge.

A corner kick in the 83rd minute flew over Hildebrandt's head and Gaossou was on hand at the far post to head in. Harrison Delbridge was marking the midfielder and blocked the header on the goal line. In a bit of melee, Hildebrandt tripped his own defender McMahon who was attempting the clear the ball. McMahon fell into dos Santos, who along with two teammates, was frantically trying to poke the loose ball over the line. As McMahon fell over he reached out to grab the ball with his hand and the official blew his whistle. Instead of pointing to the spot, the center referee signaled a foul called against Rochester for tripping McMahon.

In the final minutes of regulation, the referee let very hard challenges go without calls and let bad fouls go without bookings. In the 89th minute Delbridge deliberately fouled Forbes to prevent a counter attack in front of the referee but was not booked.

Kamdem continued to be a handful in the game aside from his first half assist and was dangerous until the final whistle. In the 90th minute he raced up the wing and did well to win a corner kick off of USL veteran Paul Nicholson. In the second minute of stoppage time Wiedeman almost grabbed the winner but his header came back off the crossbar and Gomez easily snatched the potential rebound out of the air.

The 1-1 final score is a fine result for the Rhinos after conceding first on the road to a team above them in the standings. That goalmouth scrum could have been the difference on the night but Bob Lilley would likely point to other chances the team didn't put away prior to the 83rd minute incident.

This match-up could be a first round playoff pairing if both teams maintain their positions. Rochester has now taken four points from the two meetings between the teams and Lilley drew up formation and tactical tweaks that proved effective in both matches.

The Rhinos have five matches remaining to secure their playoff spot and move up in the table but at this point the team shouldn't fear playing away to any of New York, Louisville, or Cincinnati as they earned results at all three opponents this season.

Rochester Rhinos (now 10-5-10) next plays on the road at Wilmington on Saturday night at 7PM.