The Kamara Kup/Shaving Cream Derby is always a wonderful occasion since we get to talk to our friends from Columbus and answer a timeless question - Are the Revs and Crew even good at soccer?

Two years ago the New England Revolution and Columbus Crew SC played a fairly epic and entertaining playoff series in Eastern Conference semis. Both teams have represented the East at MLS Cup the last two years, so why are both teams sitting below the red line right now?

We chat with our friend Pat Murphy of Massive Report about today's match, be sure to check out my answers to Pat's questions over on their site.

TBM: Let's start with an easy one. Are the Revolution or Crew even good at soccer? What's the over/under of the number of years we're going to set back MLS today? 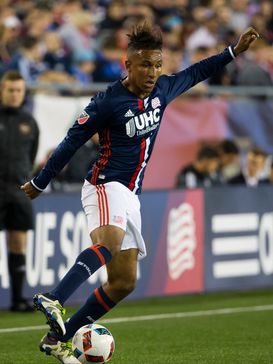 The Revs are starting to get healthy, but is it too little to late for their MLS regular season hopes?

PM: Haha, good start. I think both teams can be good at soccer, but it's hard to find that talent right now. From what I've seen of New England recently, things look rather discombobulated. The way the team was playing before Kei Kamara arrived isn't working with Kei and it has caused confusion in what to do on the field. But that's just an outsider's view.

For Crew SC, your guess is as good as anyone's. Injuries have certainly played their part, but that doesn't tell the whole story. As Revs fans saw a little over a month ago, this isn't the same team as last year despite being essentially the same team as last year. Little mental lapses that weren't around a year ago have crept up and players (Ethan Finlay and Justin Meram specifically) aren't living up to the last couple of years.

Last weekend, Finlay and Meram both got goal (scored all three of the team's goals), but a mistake by the back line and penalty kick late turned what should have been a win into a tie once again. The performance overall was much better so it will be interesting to see if that carries over to this match.

TBM: Ola Kamara hasn't missed a beat up top for the Crew, but is anyone else stepping up for Columbus? How much does getting Higuain back from injury help this offense?

PM: As I touched on above, the lack of goal production from Finlay and Meram is a major issue. There also hasn't been much of anything statistically from the players in the center of park. As you eluded to, Kamara needs help. Last week the team scored three goals and Kamara wasn't on the stat sheet at all. I guess that's progress.

TBM: The Revs have squandered three chances to separate themselves in the East, a loss today for either team could be devastating for their respective playoff chances...is this a "Loser Leaves Town Match" in the East?

PM: I think so. The story is true for Columbus. Despite not winning in 10 matches, the number of points back continues to be seven. A couple of weeks ago, the Black & Gold didn't play and the results all went the team's way (including the Revs loss to Toronto FC). I'm not sure how it's happening, but the players and coaches keep saying they need to start helping themselves.

If either team has any hope of making the playoffs, there needs to be a winner in this contest, which means it will undoubtably be a draw.

Tony Tchani is suspended with yellow card accumulation and Waylon Francis injured his shoulder last week. Gregg Berhalter didn't rule out Francis, but he didn't practice all week. Corey Ashe would be the likely replacement but he has dealt with a knee injury. It is possible he is available for this one.