The staff take a look at a few players who have performed well in 2016 and also a few who might be trending down to start the season.

Share All sharing options for: Stock Up, Stock Down - Early Season Revolution Edition

The 2016 MLS regular season is about a third of the way in, and there's a lot to talk about with the New England Revolution.

This is a team that has only lost two games, but also on the flip side has only won once. The offense has largely been struggling and several players haven't featured as prominently as many thought to begin the year. So whose stock is up and whose is down? Let's see what the staff thinks:

I was firmly in the camp that wanted to bring Jermaine Jones back for 2016, but with a long suspension and a new contract to be worked out the Revs moved on. The signing of Designated Player Xavier Kouassi on a pre-contract was supposed to shore up the midfield in the summer but an ACL injury forced New England to find a more immediate replacement.

Enter Koffie, who's done really well partnering with Scott Caldwell as the teams' holding midfield duo. Koffie's recorded one assist, has completed about 85% of his passes on the season and leads the team with over 2 tackles per game. He was always going to be the enforcer in the middle and while he does have three cautions and a red to his name already the Revs have the depth around him to play though the occasional suspension. Koffie was never going to have the same offensive impact as Jones did in 2014 but he should be able to total up a couple of goals and assists throughout the year. As a short term signing, Koffie's been a solid pickup.

He might not have made any penalty saves, but Shuttleworth had a solid April. The man between the sticks has become more reliable as a keeper who can make big saves. For example, Shuttleworth batted away five attempts from the New York Red Bulls, helping his team to a 1-0 victory. Could his distribution be better? Sure, but Shuttleworth's growth as a shot-stopper should be recognized. Plus, he apparently adopted the nickname Big Save Bob.

Shalrie: I Want To Tell The Fans Goodbye 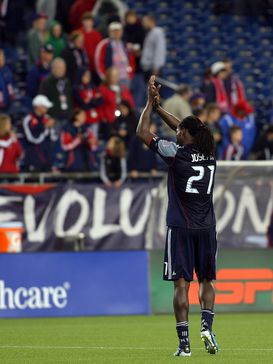 Seth Macomber talked with Revs legend Shalrie Joseph about retirement and his final, appearance-less season in New England and the fans he can't thank enough.

On draft day, Revolution media praised the front office for snagging Jordan McCrary and Michael Gamble in the first two rounds, claiming that both selections could make immediate impacts. Very few could have predicted the rise of 51st overall pick Femi Hollinger-Janzen. Hollinger-Janzen was a bottom dweller on the depth chart at the forward position, stuck behind reliable options such as Charlie Davies, Juan Agudelo, and Teal Bunbury.

Poor performances and injuries, however, plagued the Revs' attacking corps which opened the door for Femi. After 10 matches, he has appeared in six, making one start. Hollinger-Janzen has been a spark up front and will hopefully do what Davies, Agudelo, and Bunbury had a hard time doing: scoring goals. His first career goal was nixed after it was ruled an own goal, but his gritty playing style will put him on the scoresheet soon enough. Look for Head Coach Jay Heaps to continue to utilize Femi in the midst of the Revs' offensive struggles.

This is not entirely a knock on Teal, but more a problem with the Revs' injury situation up front. Teal has been forced to play more as a lone striker rather than the target winger role that he's done so well in since late 2014. With the revolving door up top, the Revs haven't been able to get any consistent production from their strikers and Teal falls into that group.

The big stat for me is Teal is just 6 of 17 for shots on target this season. With just one goal and no assists and a struggling offense trying to work it's way out of a slump, putting Teal up top brings a lot of dread to some Revs fans. To be fair, Teal has done some of the great little things up top, like hold up play with his back to goal, etc., but New England needs that lone striker position to produce, and right now, no one, including Teal, is putting up consistent numbers from that position.

The 2016 season has not been friendly to Davies, who has followed up his 10-goal, 2015 campaign by scoring just once in eight appearances. Injuries have marred the early part of his season, with a hamstring strain in week two forcing him out of six consecutive starts. He finally landed a spot in the Starting XI last week against Portland, but for the second time this season, exited the match with a first-half injury. Davies latest ailment—a bothersome groin—will likely derail his comeback attempt, pushing him further and further from his 2015 form.

Heading into the season, Barnes had a realistic shot at being the starting right back. Ten games in, the veteran is nowhere to be found. The versatile Barnes has lost his spot on bench to the likes of Donnie Smith and Sambinha. There have been whispers that Barnes is injured, but he hasn't appeared on any reports and has been spotted at recent practice. With the back line depleted, Barnes could be in store for a big May. For now, however, his stock has certainly fallen.