The LA Galaxy are on a bit of a hot streak, with Gio dos Santos leading the charge. Will the Western Conference continue their pounding of the East this week?

Share All sharing options for: Know Thy Enemy: Three Questions with Sean Steffan of LAG Confidential

The New England Revolution are on the west coast for a Sunday afternoon national television game against he Los Angeles Galaxy. We chatted with site manager Sean Steffan of LAG Confidential about what's going right for the Galaxy recently and why the West seems so much better than the East.

Be sure to check out my answers to Sean's questions over on their site as we discuss Juan Agudelo and if a Galaxy-Revs rivalry is a thing.

1. So Nigel De Jong returns from suspension while Ashley Cole has to serve one for a red card. How much bubble wrap should the Revs bring to the west coast and how will the LA Galaxy defense lineup this week?

Revolution at Galaxy: Preview, What to Watch For 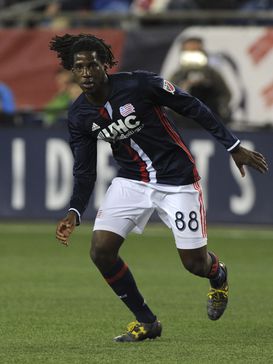 Jake Perelmuter takes a look at key matchups for the LA-NE game and whether or not rookie Femi Hollinger-Janzen will find the score sheet tomorrow.

De Jong gets a reputation for being dirty based on a handful of incidents, however, when you look at fouls per game at his position, he's one of the cleanest players in the league. He's at 1.8 fouls per 90 minutes this year which is only 18th in the league amongst centermids with 3 appearances or more, behind guys like Beckerman, Alonso, Laba, Gruezo, Sarvas and Bravo, just to name a few. Of course, this doesn't mean he isn't going to injure anyone on Sunday, but it should provide comfort to Revs fans that, at most, only 1.8 players will need to be carried off.

In terms of backline, the loss of Cole is certainly an issue as he has been one of the Galaxy's best defenders this year, however, the Galaxy have one of the best leftbacks in the league the past two years in Robbie Rogers stepping in, so it shouldn't be too much of an issue. The bigger question mark remains to be Daniel Steres. Bruce Arena is practically married to the idea of having big centerbacks, and, if the shoulders are broad enough, he's willing to overlook a lot of mistakes. I call it Leonardo syndrome and I think he's caught a case of it with Steres. Steres very much looks like a player who played in USL last year, and has been responsible for 3 goals thus far, and a DoGSO worthy foul which wasn't called. He's easily the weakest link in this impressive Galaxy backline.

2. LA has won two of their last three by big margins, what's clicking for them right now and how well do you think they match up against the Revs at home?

It all comes down to Giovani dos Santos finally getting a chance to play under a true number 9. When Keane went down, Bruce was forced to play Zardes in his most logical position and it worked for everyone. The other key was Gerrard stepping up in those two games, creating a level of flexibility in the pocket under the backline reminiscent of the Galaxy's 2014 offense. The Galaxy sorely missed Gerrard in their last game where SKC completely controlled the game and LA were unable to muster any sort of offense outside of the one counter attack they scored on.

Of course, with Gerrard likely out, and the outside possibility of Robbie Keane playing on Sunday, what the Galaxy offense will look like is anyone's guess, but, in general, it's not smart to bet against the Galaxy at home.

3. If the Galaxy were in the Eastern Conference, they'd be in first place right now, is the West just that good this year or is the East just beating each other up with all these ties? Which teams around MLS have impressed you so far?

I think the past few years the conferences have been as unbalanced as they have ever been since I began watching the league. When you look at the Columbus Crew last year, who made it all the way to the final, I'm not sure they make the playoffs in the west that year, and, if they did, it would have been in SKC's place meaning they would've matched up against Portland in Portland in an elimination game. I think this can be largely attributed to the double whammy of losing SKC to add two expansion teams.

With all this in mind, I don't see the east fully catching up with the West for another year or so, however, the season is still relatively young so I think it's kind of hard to tell if either conference got better or worst.

I think there are couple of teams in both conferences who are winning on unsustainable offensive and defensive numbers (Orlando, San Jose, and RSL) as well as teams like New York Red Bulls and Columbus, who, despite their slow start, are putting up the kind of expected goals numbers that indicate they are probably much better than where they sit in the table.

While I'm still withholding judgment on surprise breakouts Philly and Colorado, I think the biggest shock for me this year has been Vancouver. This was a team challenging for the shield last year and, so far, they have been woefully unimpressive to start the season.

The biggest question mark will be the health of Robbie Keane, which, as of writing this, is still up in the air. He's been training and Arena was quoted last week as saying he was giving it another week. It's conceivable he makes his return, and I think there is a decent chance he makes the bench.

The Galaxy tend to take care of business at home, and with multiple goals; 3-1