Shalrie Joseph reflects on his career in an interview with The Bent Musket.

Share All sharing options for: Shalrie Joseph: I want to tell Revs fans goodbye one day

When Shalrie Joseph returned to the New England Revolution ahead of the 2014 season, it had all the makings of a Hollywood ending. The club legend was back in the colors he donned from 2003-2012 and appeared ready to make one more run at the elusive MLS Cup.

Sure, Joseph, now 35, was on the older side and his years away included few highlights, but there was still hope that the former MLS MVP candidate could rediscover some of the magic that made him a perennial All-Star.

Unfortunately, it wasn’t meant to be, as injuries plagued Joseph throughout the year, eventually prompting him to hang up his boots.

Joseph reemerged as a trialist for the Revolution during a preseason trip to Tucson, Arizona. After quiet stints with a now-defunct Chivas USA and the Seattle Sounders, Joseph was ready to return to the Revolution for the final stage of his career. It was the homecoming that he always dreamed would come.

"I knew I wanted to finish my career in a Revolution uniform and I wanted to play in front of the fans one more time." -Shalrie Joseph

Although he was wearing the number 47 instead of the familiar 21, fans instantly recognized the midfielder who had long instilled fear into opponents. He was the man who held (and still holds) the record for most starts in a Revolution uniform. The one who could put the team on his back, even if it meant playing as a target striker. The one that defined passion and hard work. And he was back.

It took time for Joseph to finally put pen to paper. After battling an injury throughout preseason, Joseph’s trial was extended and he returned to Foxborough without a contract. Once fully healthy, Joseph was officially added to the roster. It was a moment of pure joy for the veteran.

"Once the off-season was done and Seattle was no longer an option, my first inclination was to come here and have a conversation with Jay [Heaps] and the guys in charged," Joseph told RevolutionSoccer.net after signing. "Finally it worked out to where I’m happy and I’m glad to be back again."

The joy would soon give way to frustration as Joseph became a regular on the injury report. First burdened by a left calf strain, Joseph would also suffer injuries to his right quadriceps and left groin.

Even when healthy, the veteran was behind the likes of Jermaine Jones, Scott Caldwell, Andy Dorman, and Daigo Kobayashi. Still, long-time fans hoped they could at least catch a glimpse of the club legend on Gillette Stadium's turf once more.

A final goodbye would never come, though. Joseph made a couple bench appearances but found himself on the outside looking in by the time the playoffs hit. When the Revs faced the LA Galaxy for the 2014 MLS Cup trophy, Joseph was on the sideline wearing street clothes rather than a Revolution uniform. Unavailable to help, Joseph watched as his beloved team lost their fifth MLS Cup final.

With the season over, Joseph had a decision to make, though his body had long been hinting at the answer.

"After being injured throughout the year when I was with the Revolution my last year, it just felt like it was time to hang it up and it was time for me to walk away from the game," Joseph said. "It was definitely a bitter feeling."

Retirement was an odd concept for Joseph, whose life had long been consumed by soccer. While in high school, he was discovered by Nick Dimitrievski, the Director of Athletics and Head Men's Soccer Coach at Bryant & Stratton College. Two years at Bryant & Stratton College was followed by two years at St. John’s University. He was then drafted by the Revolution, leading to 12 MLS seasons.

Joseph is hoping to find the Next Soccer Star 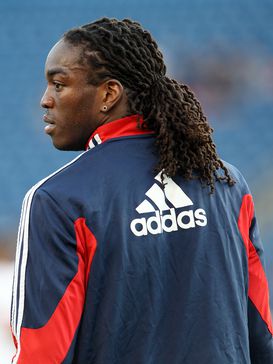 Shalrie Joseph has partnered with America's Next Soccer Star Tour.

Now, his career was over. No more mornings prepping with the boys ahead of practice. No more game days at Gillette Stadium. No more opportunities to win an MLS ring. These thoughts raced through Joseph’s mind, making retirement a tough decision.

"It was my ultimate dream to win an MLS ring," Joseph confessed. "That’s probably the thing that kind of soured me the most – not being able to win a ring."

Although no longer a player, Joseph knew he wanted to stay in the game. The natural transition was to continue his work developing future soccer stars. As a player, he founded an academy, which is something he has since refocused his attention on.

Joseph has also recently partnered with America’s Next Soccer Star Tour, which will be scouring the country for the next big thing. Joseph hopes that outlets like this will allow him to share his expertise with future generations. One day he hopes that he will be able to do the same as a member of the Revolution youth setup.

The influence of Joseph can already be been on the Revolution roster through Homegrown product Zachary Herivaux, who was once a member of Shalrie Joseph SC. Joseph remains in regular contact with Herivaux and was in attendance when the youngster made his professional debut against the Charlotte Independence in the 2015 US Open Cup. Seeing Herivaux – who wears Joseph’s long-time number – take the field instantly brought him a sense of satisfaction.

"He makes me smile every time I see him and just think about him," Joseph said. "It’s just a credit to him. I’m glad he took my number – I took it as an honor. For him to go out there and become a professional, it just feels great."

Joseph, who recognizes that he had an "illustrious career" and was "probably one of the best midfielders to ever play the game in MLS," has few regrets. His one source of disappointment, however, is not being able to say a proper goodbye to Revolution fans.

"I think New England fans are one of the most loyal fan bases you can have as a sporting team." -Shalrie Joseph

Joseph will forever be grateful to the people who traveled to Foxborough on a weekly basis to cheer for the Revolution. Through the good times and the bad, the sunshine and the snow, the fans were animated in their support. It’s something that Joseph always felt when playing at Gillette Stadium.

"I think New England fans are one of the most loyal fan bases you can have as a sporting team," Joseph stated. "They backed me when I was in contract problems. They always supported me and knew I had the best intentions at heart. I just want to say thank you for that."

If given the chance, Joseph, who gets to regularly interact with Revs fans on a post-game show on 98.5 the Sports Hub, would like to express his gratitude in a more direct way. This, of course, would mean standing in front of the Riders, Rebels, and other fans one more time.