Know Thy Enemy: Three Questions with Dave Clark of Sounder At Heart

We check in with Seattle's resident Sounder fan/Dungeon Master/Domesticator of Owlbears, the legend himself, Dave Clark.

Share All sharing options for: Know Thy Enemy: Three Questions with Dave Clark of Sounder At Heart

The New England Revolution are ending a three game homestand today against the Seattle Sounders, and with the Copa America break, it will be time for everyone in MLS to rest and get healthy again.

In the case of both the Revs and the Sounders, both teams would love to end the "first half" of the season on a high note. New England is coming off a 4-2 loss to FC Dallas while Seattle lost 1-0 to Colorado. Both teams have 13 points on the season, though Seattle has played just 11 games to New England's 13.

Today we talk to Sounder at Heart manager Dave Clark, who you should absolutely follow on Twitter to get your daily soccer/D&D fix. Make sure to check out my answer's to Dave's questions and pay no attention the fact that I think Chad Barrett is still on the Sounders (he's a SJ Quakes player now) or Je-Vaughn Watson being in the starting lineup (he's with Jamaica) at right back instead of London Woodberry.

1. Taking a quick look at the Supporter's Shield standings, is the Eastern Conference pants? What are your thoughts on the disparity between the two conferences this year in MLS and why is Seattle below the red line right now?

SaH/DC - The East is pants. Part of that is because TFC started so long on the road. They should be as good as any team in the West. Another part is Columbus falling apart. Lastly, if New England was matching their expectations they would match Western Playoff teams too. Instead it's a conference dominated by Philly and Negative-Six City.

Seattle's below the red-line because the offense sucks. Clint Dempsey can't score at a reasonable rate this year. Nelson Haedo Valdez can't play at a reasonable rate this year. Their best attacking player is Jordan Morris, and he's a rookie. The "other" forwards in this mostly 4-2-1-3 are a bunch of replacement level to average MLS players - Kovar, Gomez, Ivanschitz, Anderson, D.Jones and Craven. That's a lot of youngsters, but not a lot of goals. If the team knew there would be life without Obafemi Martins they should have kept one of Lamar Neagle or Chad Barrett. But at least the keeper is great, the defense is good to great and the possession game is incredible. 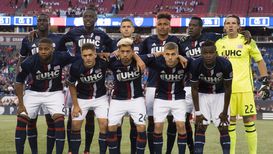 2. Clint Dempsey is with the USMNT for Copa America and Jordan Morris is not. Did Morris get snubbed and who fills in for Deuce this week?

It's hard to say Morris got snubbed. While he has several calls already few of those are games that matter. This would have been the first tournament where, if called, he would have been part of the regular group. While Morris will be in that discussion, probably for the rest of the World Cup Qualifying cycle, this is a tad bit early.

Plus, this puts pressure on him. Jordan is the only scorer left on the Sounders. He will have three league games and an Open Cup match to prove that he can carry a pro side. If Jurgen wants to see development, having Morris be the focus of the attack in Seattle while they are playing for their coach and playoff lives will do that. His partners up top will be former Stanford teammate and HGP Aaron Kovar and former USMNT forward Herculez Gomez. It's going to be rough.

3. If given a choice, and you can fill in your own scenarios, would you rather leave Kei Kamara or Lee Nguyen open in/near the penalty area?

I was going to make a Kei Kamara missing the sitter joke, but I think I'm still going with Kamara as long as the ball is at his feet. I expect Nguyen to get open looks from distance and Kei to get a couple headers in the box. What I do not want to see is Lee open in close for a one-time shot, nor do I want to see Kei unmarked with a cross aimed at his head. Both of these scare me.

This is a game where I expect Seattle to give up at least one goal. The Sounders have somewhere between a good and great defense, it's just that New England's attack is good, especially after the Kamara addition. This thought experiment is a good reminder of the variety of ways that the Revs should be able to approach Seattle.