Revolution vs. FC Dallas: What to Watch For

The Revs host FC Dallas with just two games remaining until the midseason break for the Copa America. Can they keep up their winning ways?

Share All sharing options for: Revolution vs. FC Dallas: What to Watch For

The New England Revolution face FC Dallas at home tonight as they look to extend their momentum after last week's win versus the Chicago Fire. Newly acquired Designated Player Kei Kamara got Revolution fans excited after managing six total shots over 90 minutes. A new, winning attitude surrounds this team after trading for Kamara and earning a win, and they will play with that attitude tonight against the second best team in MLS.

Watson Going to Copa 2016 With Jamaica 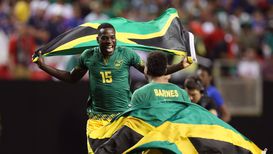 Current Revs defender and former FC Dallas player Je-Vaughn Watson is going to Copa America 2016 as Jamaica officially announced their roster ahead of the tournament.

The ‘W' returns to the Revolution form for the first time in over a month after a convincing 2-0 win last weekend versus the Fire. Whether or not that performance will translate from a match against the last place team to a second place team is questionable, but the Revs got what they wanted out of Chicago. Kei Kamara looked sharp in his first appearance in a Revolution kit in addition to strong performances from Femi Hollinger-Janzen, Lee Nguyen, and Mr. Versatility Kelyn Rowe who found himself on the back line instead of his usual midfield position. The Revolution will need a duplicate performance to take down FC Dallas who have won two in a row. A win will give the Revs 16 points on the season which is good enough for a playoff spot in the tight Eastern Conference.

The Toros bounced back from a three game losing streak by sweeping Cascadia, defeating the Portland Timbers and Seattle Sounders in back-to-back games. FC Dallas now finds themselves one point out of first place in the competitive Western Conference. This Dallas team is one of the most talented teams on paper in MLS, however they are yet to find their groove this season. They have been incredibly streaky going unbeaten in six, losing three without scoring a single goal, and then winning two.

Only two game weeks remain until MLS takes a three week hiatus for the group stage of the Copa America Centenario, and two wins out of two would certainly bring Revs fans out of the slump they have been in for a majority of the season. The season is long, and given the poor play of the Eastern Conference, two wins would put the Revolution right in the heart of the playoff picture entering the break. The Revs will welcome back Jose Goncalves this week from injury, and Chris Tierney and Teal Bunbury may be close to a return as well. If the back line is at full health and the attack replicates its performance from last weekend, the Revs may be looking at 3 points.