A few people have noticed that it's MLS' first Rivalry Week of 2016, and thanks to a scheduling quirk, the New England Revolution host FC Dallas this week, instead of say the Chicago Fire last week.

It's #RivalryWeek and #NERevs are playing Dallas, while Houston is playing Chicago. Hmmm.

Maybe we could've flipped those two fixtures? I mean, I'm aware that the Revolution once traded away Oscar Pareja for a bag of soccer balls back in 1999, but we don't speak of the pre-Nicol years much. I could bring up that wonderful 2007 US Open Cup final and Wells Thompson's winner but I don't think Dallas harbors much ill will towards New England because of that.

With that said, I talked with Drew Epperley of Big D Soccer and we both regret the lack of Rivalry Week questions (and mostly sarcasm about this Rivalry Week matchup) in this Q&A. That's a bad job by us and next time we will do better, but check out my answers to his questions over on their site.

Anatomy of a Trade: How the Revs FO Landed Kamara 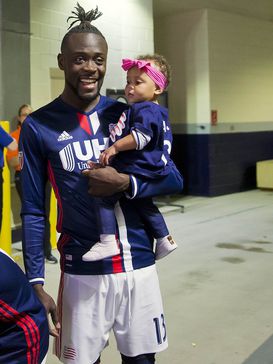 The New England Revolution gave up a lot of GAM, TAM, draft picks and other MLS goodies in a blockbuster trade, because the Revs front office is the best at gaming the system.

1. Oscar Pareja might be good at this whole coaching thing, as Dallas sits 2nd in the West on points. What's one of the reasons Pareja's been so good during his tenure as FCD head coach?

DE: Oscar is a players' type of coach. He knows how to bring out the best in players and in all honesty, players want to play for him. A lot of the younger guys tell me often that the reason why they love playing for him is due to his passion and knowledge but also because he's been there in their shoes, in this city, with this team. MLS may be a lot different than it was when Pareja played in it but he has a great ability at adapting to the game where it is now with the players that he has.

DE: FCD has gone through some ups and downs with the academy system. They're still arguably one of the best at developing talent in those stages but not every player translates well into a professional. A lot of the players that didn't work out here have come down to their attitude and work rate. Pareja has given a couple of those that have been released in recent years additional chances to prove themselves again since he coached so many of them back when the academy teams were first formed here.

Only one has really stuck it out in Victor Ulloa but that is because he showed the effort and work rate that Pareja wanted in a young player. Pareja still gives a ton of minutes to the HGPs on the roster though, as we've had games with three and four, sometimes five HGPs on the field starting together. FCD is proving that if you can sign the right players from your system and play them early on that they do develop well.

3. There's been some very lopsided losses for Dallas on the road this season, what happened in those games at Houston/Vancouver/RBNY and how can FCD avoid a similar result in New England?

DE: It has been interesting watching this team on the road this season because of those three results but there are two good ones sandwiched in there in wins at DC and Portland. A lot of it has come down to how this team begins games. If they get caught on their heels early like in the Houston and New York games, they tend to struggle to fight back. But in contrast, those two wins they had saw them score early and then hold on to get the three points. It really will come down on Saturday to how well FCD starts the first 15 minutes of the game.