"The Duke" led the Revs to victory.

It's not very often that a play you draw up in practice works in a game which is why Lee Nguyen was a bit surprised when their corner kick strategy ended up with the ball in the back of the net. 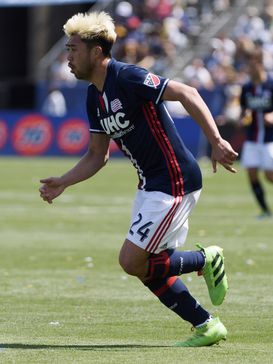 It all started when Nguyen played a short corner to Kelyn Rowe, who found Scott Caldwell at the top of the box. A one-touch pass from Caldwell gave Nguyen the opportunity to launch a shot that left goalkeeper Matt Lampson stunned.

The play and the goal were better than Nguyen could've ever imagined.

"It worked out better than it did in training," Nguyen explained. "It is always good when a play like that, when you have been training a couple times, and it works out perfectly."

Perhaps unsurprisingly, that play was inspired by Jay Heaps' time at Duke University, where he played under legendary basketball coach Mike Kryzyzewski. As an ode to his alma mater, Heaps calls the play "the Duke."

"Because it’s got like a basketball cut in it," Heaps said when asked about the nickname.

The Duke helped the New Englan Revolution grab a 1-0 lead, which would later roll into a 2-0 win. Obviously happy to collect three points, the Revs were also satisfied to score on a set piece, which Rowe admitted was something they've wanted "for a long time."

Could we see the Duke again? Don't rule it out but the conditions have to be just right.

"I think it’s one of those things where we have a couple plays, like Jay said, and we just kind of have to see where it unfolds and how they play against us," Nguyen said.