Kei Kamara "excited" by what he's seen from Revolution fans

Share All sharing options for: Kei Kamara "excited" by what he's seen from Revolution fans

Kei Kamara hasn't been a member of the New England Revolution for long but he's already received a lot of love from the team's supporters.

Fans Welcome Kamara at the Airport 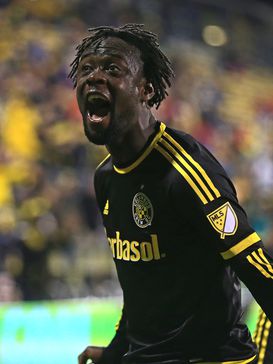 Kamara meets the fans and gets a scarf.

Arriving late Thursday night, Kamara was greeted at the airport by a few fans. The diehards not only welcomed their new Designated Player but presented him with a scarf featuring the colors of his new team. Kamara was overwhelmed by the gesture and posted an image of it on social media.

Two days later, Kamara made his Revolution debut by starting against the Chicago Fire at Gillette Stadium. The fans showed their respect for Kamara by spelling out his name in large letters. The forward responded by applauding the Foxboro faithful before kickoff.

The actions of Revolution fans--both big and small--have had a positive effect on Kamara.

"It’s nice to feel welcome," Kamara said. "For me, when I can interact with the fans, it gives me the extra boost, the extra motivation because it makes you feel like you’re playing for something. People appreciate it and that’s what my career has been all about."

Kamara is now playing for his eighth team in eleven years. During this time, he's often been viewed as a villain by Revolution fans, as he's scored 11 goals against their team . Now playing for the boys in blue, Kamara is looking forward to hearing the Riders, Rebels, and other fans cheer his name.

"I’ve heard how amazing fans that they have in Boston and everywhere around here are, so I’m excited," Kamara said.