Share All sharing options for: Know Thy Enemy: Three Questions with Derek Stowers of Dyanmo Theory

With the MLS regular season kicking off later today, we chat with Derek Stowers of SBN's Houston Dyanmo blog, Dynamo Theory. Check out their article with our answers here.

TBM: The Houston attack has a lot of familiar names in it: Cristian Maidana, Erick Torres, Will Bruin, Giles Barnes. How are the Dynamo going to maximize the talent and who's the key player on offense this year?

DT: Houston's offense has plenty of firepower this year, but who that will go through is anyone's guess. It depends on the formation Coyle utilizes which could feature any of the names you mentioned along with Andrew Wenger or Mauro Manotas. 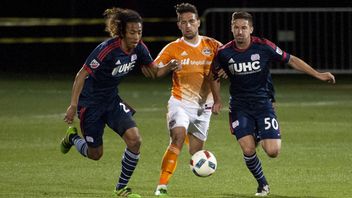 Jake Perelmuter takes an in-depth look at today's season opener for the Revolution and Dynamo.

Maidana was 2nd in assists last year and he'll likely play an important role in central midfield setting up those around him. Will Bruin is primed to have another 10+ goal season and Giles Barnes will continue to be a threat from various areas of the pitch. Manotas had an excellent preseason and Wenger's versatility will keep him on the field. That leaves Cubo, or Erick Torres, in a tricky spot. While the young Mexican striker had a pretty good preseason, the even younger Manotas was more productive from several areas of the field. Cubo could feature in a 4-3-3, but will most likely see time as a super-sub.

How Coyle utilizes his players and formations in the MLS regular season hard to predict since he used a variety of personnel in various formations throughout the preseason campaign. However, I would anticipate a 4-2-3-1 with Wenger and Barnes pushing up and down the wings with Maidana underneath Will Bruin. This is a fluid formation that can become defensively oriented or potent in offense depending on the wingers' positions which will give the Dynamo control of the game. Maidana's playmaking and Bruin's finishing will be integral to the success of this offense, but I would expect with the offensive tools the Dynamo now wield for goals to come from many sources.

TBM: Now to the other side of the ball, this is a Dyanmo defense that gave up a Western Conf. worst 49 goals last year. How have they improved defensive and what has Houston been working on specifically in preseason?

DT: I think the defensive line was less to blame than the midfield for our goals allowed last year. Outside of Ricardo Clark few players put in the defensive work in the midfield which allowed opponents to maintain possession in our half of the field and create chances. With Luis Garrido, who had a penchant for overzealous challenges, and Nathan Sturgis out, the Dynamo have added David Rocha to partner in central midfield who has looked excellent so far in preseason. These two should help push play out wide and make chances on goal more difficult.

Expect The Revolution To Rebound in 2016 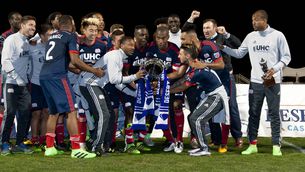 Jake Catanese discusses the Revolution's expectations for the upcoming season, and why the Revs are on track to improve on last year's disappointing season.

Strictly looking at the backline, the Dynamo will be largely the same. DaMarcus Beasley is coming off an All-Star year, despite his age, and is poised to remain one of the top left backs in the league. Raul Rodriguez, who adds playmaking abilities and a lot of intelligence to central defense, should partner with Agus Garcia, an offseason acquisition of the Dynamo's. Houston traded for Sheanon Williams last year and he has provided tremendous support at RB. With this line and support from the midfield, the Dynamo should have their 2015 defensive woes shored up.

TBM: Houston has had so much success when it comes to the playoffs, but head Coach Owen Coyle can't be on the hot seat in just the beginning of his second season, could he?

DT: This is such a difficult question. The Houston Dynamo has been, and always will be, a playoff team, but we're coming off a 3rd consecutive year having missed out on a chance to win a 3rd MLS Cup. This is Coyle's 2nd year and he can't be held completely accountable for missing out on the playoffs last year with a squad that he inherited from Dom Kinnear.

Coyle and General Manager Matt Jordan have been busy this offseason adding 11 new players and seeing 12 leave the Dynamo. Coyle now has "his" squad and his success is now solely in his hands. Missing out on the playoffs is simply unacceptable for a team like the Dynamo. If we don't make it, will he be gone? It's very hard to predict at this moment, but I'd say it's a warm seat depending on how the season goes.

Predicted Outcome: Dynamo 2, Revs 1. The Dynamo are 6-1-3 in their home openers and I would expect nothing less than a draw. However, the sting of last season for many of the players and coaching staff is still there so I would think their hunger for a win will carry them to get the full 3 points.