United States-Guatemala Preview: Back From The Brink, Again

The United States has been here before, just four years ago they had four points through three games. They survived, but somehow their streak of 7 straight World Cups seems at risk.

Share All sharing options for: United States-Guatemala Preview: Back From The Brink, Again

Very rarely can a single day of qualifying for one team, or this case teams, be so important to one national team.

But the United States senior men's team and the U-23 Olympic team playing on the same day is a rare occurrence. The senior team can gain control of their World Cup qualifying group with a road win at Guatemala and the Olympic team plays the first leg of a playoff against Colombia (5pm, FS1).

While I won't focus on the Olympic team here, check out this post from Stars and Stripes FC, today is a very big day for the USA's soccer program as a whole.

Guatemala 2, United States 0 - That Was Pants 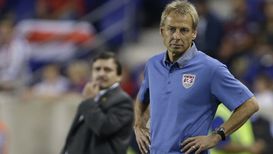 In what could be the worst loss (and that's saying something) of the Klinsmann era, the USMNT now faces a must win at home tonight against the same Chapines team that beat them just four days ago.

I've made no attempt to hide my discontent for head coach Jurgen Klinsmann in the past, recent friendlies against Iceland and Canada were a nice shift in personnel on the field. Yes, this was due in part to the January camp focusing on more domestic players, but getting Lee Nguyen, Ethan Finlay and Darlington Nagbe all involved with the senior team should have paid dividends now with those three players sticking with the senior side.

Except, well, in order to see the return on your creative investments in the attacking midfield, you actually have to play those three players. Instead, we got a standard mess from Jurgen Klinsmann in his baseline up. An un-creative 4-4-2 with multiple players out of position and resounding thumping at the hands of Guatemala on Friday.

That can not happen tonight.

Back in 2012, the USMNT were in basically the same situation they're in now, only slightly worse. During the last round of qualification, the US was paired with a solid Caribbean team (Jamaica), Guatemala (I'm sensing a patter here) and a minnow (Anitgua and Barbuda). In 2012, the USMNT drew at Guatemala before losing at Jamaica. The USA through three games had a 1-1-1 record just as they do now, except this time they're in 3rd place, not tied for second on four points.

#USAvGUA Previews We Like: The Yanks Are Coming, Stars and Stripes FC

Yes, a win today could restore order with Guatemala yet to play at Trinidad, but the question should remain: Why are the USMNT struggling in the SEMIFINALS of qualifying?

Well, as far as I'm concerned, that falls on the manager who says he's not playing anyone out of position. This, as SB Nation's Conor Dowley points out, is a lie. Because who in their right mind would put Geoff Cameron at right back over DeAndre Yedlin when both players are in the same lineup? Only Klinsmann can continue to find ways to make Michael Bradley completely ineffective in the middle of the field.

And with all that being said, a win today could cure all that ails the US as far as qualifying goes. But with Copa America looming in just a few months, at this point it I would take a massive turnaround for the USA to advance into the knockout stages this summer.

I mean, Landon's and my biases against Klinsmann aside, the team's play on Friday in Guatemala makes it seem like that statement is accurate. Klinsmann refuses to put his players in the best positions to win or whatever he's doing in training isn't translating onto the field. Either way, it's a problem.

So how does Klinsmann turn it around tonight? With a little bit of everything, going back to a few veteran stalwarts and overhauling the midfield.

Honestly, it could be Bobby Wood or Jozy Altidore up front but with the dynamic trio behind him, I think Duece could just add to the chaos/fun in the final third. We've been clamoring for a true playmaker in the midfield and the New England Revolution's Nguyen is the right man for the job. Bedoya goes to his usual left wing and the impact man off the bench from Friday in Nagbe gets the start.

This is the type of midfield the US needs to have in order to be successful. Players in their natural positions from their club level with specific roles that highlight what the US can be great at, such as the counter attack. Combining Nguyen's creativity with the all-around play of Nagbe, Bedoya and Bradley around Lee will open up scoring chances not only for whichever striker is up top, but also the midfield.

The back end of the midfield goes back to basics, Beckerman staying at home to let Bradley go cause trouble everywhere else. The backline sees no surprises with the best fullbacks at their proper position and Omar and Cameron the best centerbacks available.

It wasn't all bad for the US in Guatemala, as they forced keeper Paulo Motta into a man of the match performance with five saves. But they US also missed three chances on top of the ones saved by Motta and they can't have a repeat finishing performance in Columbus.