The New England Revolution play D.C. United in their home opener today at 3pm EST. So we talk with our good friend Ben Bromley of Black & Red United. Don't forget to check out this week's episode of the B&RU Filibuster Podcast where Steve Stoehr joins in for the second half of the show to break down the Revs. Also, check out our answers to Ben's question over on their site as well.

TBM: So last week didn't go so well, and somehow DC United turned Mike Magee into Lionel Messi. What happened in the second half against the Galaxy? 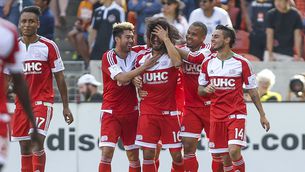 Jake Perelmuter returns with what you need to know about today's home opener.

BR: The D.C. United you saw in the first half is the team that they are trying to be: quick passes in midfield, deflecting danger from the back line, and making their shots count when they get them. In the second half, the fact that the central midfield is new, the goalkeeper isn't Bill Hamid, and the center backs aren't playing like they did in 2014 caught up with them. The team is trying to play a different style, with Nick DeLeon moving into central midfield dictating a more quick pass and attractive style. It worked for 50 minutes in this game which is longer than it worked in the preseason and it will continue to get better as the season goes on. Finally, Mike Magee has a game like that once a year, at best, and at least one of his goals could have been saved by United's regular keeper.

TBM: Bill Hamid is out long term, Andrew Dykstra was the starter last week but is one time Revolution (giggles) player Charlie Horton perhaps the heir apparent in DC?

BR: Charlie Horton was definitely brought in to be given a shot to be Bill Hamid's replacement. Hamid, when he's not injured, is easily one of the top three US goalkeepers and, giving current form, could challenge for the best. He is going to go to Europe, and probably sooner rather than later. United had chances to sign typical MLS backups this offseason, who would have been no better than Andrew Dykstra: Chris Konopka, Paolo Tornaghi, and Benjamin Kirsten. Horton has more potential than that, having been a U-23 starter and played with Cardiff City and Leeds United. D.C. United has to start preparing a succession plan, and Horton is going to get a shot to see if he is the heir apparent.

TBM: Nick DeLeon, Chris Rolfe and others have been Revolution killers in years past for DCU, will Luciano Acosta quickly add his name to this list?

BR: Lucho has already impressed D.C. United fans in his short time with the team. His control, acceleration, and passing are of the like that United has not seen in a long while, and he is tough enough (so far) to compete in Major League Soccer. He will need to score some goals this year, but he will also need to be the provider and create chances for everyone else. So far, he has looked steps ahead of the rest of his teammates, so as they learn to look ahead he should become even more dangerous.