The 25 year old forward was one of eight players from the Rhinos 2015 roster without a home for the upcoming season before Real Salt Lake's reserve side announced signing Rolfe.

Share All sharing options for: Colin Rolfe Signs with Real Monarchs SLC Amid Chaos in Rochester

Colin Rolfe will be joining his former teammate and 2014 Revolution loanee-in-Rochester Alec Sundly in Utah after the USL announced the striker has signed with Real Monarchs. Rolfe also reunites with Tyler Arnone, who spent a lot of time in the 2015 preseason in Rochester before eventually signing with the Real Salt Lake affiliate.

Over two seasons in Rochester, Rolfe scored 8 goals and added 3 assists in 51 appearances and 29 starts for the Rhinos. Despite scoring more goals in 2015, Rolfe was frustrated with his playing time and with his place in the team. The former Houston Dynamo forward expressed to media on multiple occasions that he felt he deserved more time on the field than the Rochester coaching staff was willing to give him. 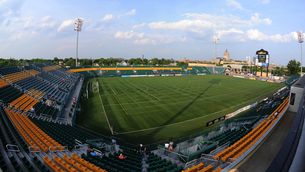 Yesterday the USL league office announced it had terminated the ownership group of the Rochester Rhinos, led by Rob Clark, and taken control of the defending champs.

Rolfe particularly took exception to the characterization that he was an impact substitute for the Rhinos, saying that he believed he had the talent to start games. This personal drive will serve Rolfe well in a new setting after Lilley's tactical setup in 2015 favored other personnel. During the second half of the season, the coaching staff preferred to play a single center forward, either Steevan Humberto Fortes "Duba" dos Santos or Christian Volesky, with either Alex Dixon or Kenardo Forbes operating slightly behind.

Rolfe may simply not have wanted to be the third choice forward, as both Duba and Volesky are under contract for the 2016 season, but the tumult surrounding the Rhinos did not help the team's bargaining position. The remaining players from the championship winning squad (Onua Obasi, Drew Ruggles, Julian Ringhof, Christian Silva, Mike Garzi, Johnny Mendoza, and Nate Bourdeau) may easily be turned away from the Rhinos after news broke on Tuesday night that owner Rob Clark was pushed out by the league.

If regular starters in the record-breaking 2015 Rochester team like Obasi, Garzi,or Mendoza are seeking increased wages, it is also very unlikely the league would negotiate anything close to a bank-busting salary bill while it still operates the team.

Traditionally the Rhinos open training camp in the last week of February but the team holds several open tryouts and invitational combines before then. Some players, especially those represented by agents, will leave combines if the team refuses to meet initial contract projections. This was the case with Evans Frimpong, who tried out for the Rhinos ahead of the 2012 season before signing with the Tampa Bay Rowdies of the NASL.

Ultimately, Colin Rolfe saw an opportunity that presented the potential for more playing time in the 2016 USL season and signed with Real Monarchs SLC. Other players, both those from the 2015 Rochester squad and current free agents, may be discouraged by seeing a disgruntled two-year forward move far away from the Rhinos and the team tread water without an owner.