The 2015 USL Champions Rochester Rhinos are without an owner after the league took exception with the attitude of Clark's company Adirondack Sports Club, LLC. Just months after lifting the league's trophy, the Rhinos are now being operated by the league.

Share All sharing options for: USL Takes Control of the Rhinos after Rob Clark is Ousted as Owner

Tuesday night's news comes after months of negotiations between the league, the ownership group, and the city of Rochester.

The league's press release mentions that Clark did not show effort to meet new standards for ownership groups. USL references "both internal and external operational issues" and Clark's reticence to "rectify these issues" as the reason to take over control of the team.

Jeff DiVeronica, who has covered the Rhinos since their inception, provided more details on the tension surrounding Clark's ownership. DiVeronica interviewed city employees who claimed that Clark skimped out on a significant tax bill for the city-owned Sahlen's Stadium.

In return, DiVeronica quotes Clark saying "I'm operating at several-hundred-thousand-dollars-a-year losses." To further underline the precarious financial situation for lower division soccer, the Utica, NY based banker added, "I'm not in the business of charity work." 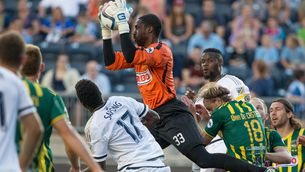 Reigning USL Goalkeeper of the Year Brandon Miller, defender Pat McMahon and winger Alex Dixon will not be back with the Rhinos next season.

As anyone who has visited Sahlen's Stadium or watched a game online in recent years can attest, the facility desperately needs maintenance. The playing surface has been compared to a parking lot by one international veteran who played in Rochester. Harming the fan experience, the video board has several blown bulbs that block large sections of any replays shown.

Writing for Empire of Soccer in July, Ryan Brister detailed the ups and downs of the Rochester Rhinos during their initial 20 year history. To illustrate the extreme highs and lows of soccer in the city, the ouster of the Rhinos ownership comes on the heels of its first title since 2001.

This news also puts the USL in an awkward position. While the league has expanded extensively in the past two years, much of that growth comes from MLS teams operating reserve sides in the league. DiVeronica notes that three of the non-MLS teams joining USL have deep-pocketed owners; FC Cincinnati with the Lindner family, Herb Simon with the unnamed Reno team (which starts in 2017), and the San Antonio team that is owned by the NBA's Spurs parent company SS&E.

While the Rhinos were clearly not the worst-run organization in the league, this bold step of showing the door to Rob Clark sends a message to the old guard of the USL. 2015 saw the long-time USL member Charlotte Eagles drop into the amateur PDL to avoid the rising costs of competing in the professional USL. With the new crop of millionaire owners entering the league, what happens to other American soccer stalwarts like Richmond Kickers or Charleston Battery?

In late November local Austin paper wrote about the financial troubles of the USL team in that city. The Austin Aztex rose from the PDL to the professional league for the 2015 season but quickly lost money on the endeavor. The report by Kevin Lyttle laments the Aztex "whose losses last year probably exceeded $1 million on an operational budget north of $2 million." That team will now sit out the 2016 season in hopes of conjuring a financial plan to return to the field in 2017.

The financial failure of the Austin Aztex and the swift action with regard to the Rochester Rhinos, which Clark saw as a money pit, paints a far different picture than the blossoming league that the front office in Tampa promotes.

As Rob Clark walks away from his ownership of the Rhinos, the city of Rochester will be much more likely to play ball with club after it secures new ownership. All the league and Rhinos have to do is find a millionaire willing to eat huge losses to provide a waning fanbase with a third division soccer team.