Boston Rams Confirm PDL Team Will Not Play in 2016

Share All sharing options for: Boston Rams Confirm PDL Team Will Not Play in 2016

Earlier today, a report from Brian O'Connell and New England Soccer Today stated that the affiliation between the New England Revolution and PDL side Boston Rams would end.

That's not entirely true according to Mike Madden, listed as the Vice President of the Board of Directors on the team website. Madden did confirm that the Rams would not field a PDL team in 2016, but that the team's partnership with the Revs at the youth level would continue.

"We learned a tremendous amount about running the PDL side and it was a great experience for the organization," Madden told The Bent Musket during a phone interview. "But unfortunately, the costs were just something that were difficult to sustain for the PDL team." 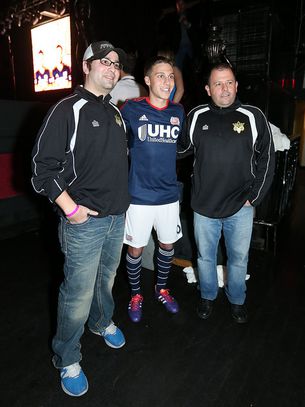 Shame that we won't be seeing the new logo in the PDL this year though.

Madden, who's Boston Rams just underwent a rebrand with a new logo, was still excited for his partnership with the Revs moving forward at the youth level. The Rams will still field youth teams up to the U-18 ranks and Madden was very gracious to the MLS side for their support over the last three years.

Revolution Youth Academy coach Hobie Hare will remain the Rams Technical Director after serving as the Head Coach for the PDL Rams team. Assistant Jasir Charris served as an assistant coach for the PDL team and would be among the many Revs Academy assistants to still be involved with the Rams.

"The Revolution have been a tremendous help to our organization," said Madden. "From training at Gillette Stadium and everything their entire youth coaching staff has done for us, it's been a pleasure to work with them."

In the short term, the Revolution are without a true PDL affiliate for their college age academy/homegrown players. Cole DeNormandie from Boston College and Dominik Machado and Manny Andrade from Providence were among the Revs academy graduates to play for the Rams over the last few years. The NEST report also states the Boston Bolts, also known as FC Boston, are the likely replacement for Boston in the PDL market and the Bolts' website mentions a new PDL team here.

Overall, it's sad to see the Rams PDL team be shelved even temporarily. I got to cover a Rams friendly against the Revolution back in 2013, along with the Newtown Pride-New York Cosmos to benefit Sandy Hook, and there was an excitement about the team from the coaches and players. I do hope the Revolution continue their affiliation with the Rams at the youth level.

The Rams finished 3rd in the PDL's Northeast division in 2015 but failed to make the playoffs in their three seasons in the league. Their exit leaves the division with just four teams: AC Connecticut, GPS Portland Phoenix, Seacoast United Phantoms and Western Mass Pioneers.