2016 is a big year for the United States MNT and U23 Olympic team, and it starts off with a friendly against rising European team Iceland.

There's a lot going on in 2016 for the United States. Jurgen Klinsmann's team is coming off a dismal campaign last year, losing in the semifinals of the Gold Cup and falling to Mexico in the Confederation's Cup playoff.

World Cup qualifying will continue in March with two games against Guatemala and in the summer will be the Copa America Centenario hosted by the US and containing six CONCACAF teams in the South American championship. In Brazil, the 2016 Olympics might feature the US, though they have a playoff series still to determine their fate.

It all starts with the usual January camp, this year with a mix of USMNT veterans, MLS fringe players and a good crop of U23 eligible players, as Klinsmann is looking to perhaps jump start their training ahead of a March playoff against Colombia. It's also a team that is largely in transition. The old guard of Tim Howard, Brad Guzan, Clint Dempsey and others are fading. In their place, a really talented but unseasoned group of kids looking to add their names to list of international pool for the World Cup cycle.

Also, two New England Revolution veterans in Lee Nguyen and Jermaine Jones are looking to make statements of their own. Nguyen has been a fringe national team player the last year or so, following his MVP finalist season in MLS in 2014. Considering the USMNT's struggles at the playmaking #10 in the past few years, he's could be a solid answer to USA's offensive woes that have plagued the team dating back to the 2014 World Cup. The only question is, does Klinsmann start the Revs midfielder in the middle or will Lee be relegated to a late game substitute as he has in his most recent appearances.

Jones is looking to make a different kind of statement. Currently out of contract and facing a six-game suspension, Jones needs two big performances to prove to either the Revs or other teams internationally that he's a viable player at the age of 34. Coming off an season where he battled hernias and missed half of the Revs MLS' games due to surgery and international games, Jones can still be a force on the field. Two good games with the US could give him the small amount of leverage he needs to sign his next contract. 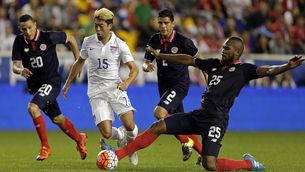 Revs defender Chris Tierney spoke to our Seth Macomber on Lee Nguyen and his international call up.

There's actually a surprising amount of depth and options on this roster, so I fully expect this to be wrong. The big question is going to be the midfield, and how Klinsmann deploys his formation. Does Bradley return to the playmaking role higher up the field, opening up a holding role for someone like Perry Kitchen, Tony Tchani or Wil Trapp? Does Jurgen opt for another striker like Jordan Morris up top, dropping one of the big midfielders? For once, it's actually a nice problem to have.

That doesn't mean this roster is perfect. Matt Miazga's signing with Chelsea means he's left camp, opening up a centerback spot for veteran Michael Orozco. I'd have normally paired Besler and Miazga in the starting lineup, but Birnbaum should fill in nicely. Fullback is perhaps the weakest link here, with a lot of inexperience at the position behind utility man Brad Evans. Miller gets the nod over Brandon Vincent, recently taken high in the MLS Draft, to start opposite of Evans. I would like to see Kellyn Acosta off the bench in this one though especially with the US' issues at right back recently. There's no wrong answer in net either, but I'll opt for Robles against Iceland and likely give Sean Johnson the nod versus Canada later in the week.

Everything in my gut tells me to avoid the Jones/Bradley midfield pairing, but I want a proper CAM in front of them. Since I'm a homer, I opted for Nguyen but if it's Darlington Nagbe instead, I won't be upset. I just want to see Bradley in a more box-to-box role than a creating one. Out wide is really where you can have a lot of fun. I'm really excited to see Finlay in camp and want his service from the right side. The left is more of a question mark, and Zardes can run hot or cold at the position and a more box-to-box midfielder like Mix Diskerud might be better coverage for the inexperienced left backs, but I'll let Zardes start and see what he does for a half.

Up front, Altidore starts but Jordan Morris is also a viable option. Jerome Kiesewetter and Khiry Shelton are probably more wingers than lone strikers, but Kiesewetter is likely going to be the Olympic starter for the U23s and deserves a look as well. Overall, there's certainly seems to be enough opportunities for the fringe veterans and youngsters over the next two games, and it will be interesting to see how Klinsmann deploys this group and how they perform against two rising teams.

I'm really disappointed that Aron Johannsson isn't healthy enough for this game, as we should be calling this the Johansson Derby. The Icelandic-American chose to play for the USA but it's a decision that hasn't affected Iceland at all. They've been on a big tear the last few years, rising up the FIFA rankings and barely missing out on the 2014 World Cup playoff loss to Croatia. Iceland is however locked in to the 2016 Euro Championships, finishing second in Group A behind the Czech Republic and sweeping the dismal Netherlands who were eliminated in 4th place. The 2016 Euros will be Iceland's first major tournament in its history, a tremendous achievement for a team that in 2012 was ranked 131 in the world.

This is however, a very young roster Iceland has for this match, with only six players having double-digit international caps and just seven goals when to you take away former Chelsea/Barcelona attacker Eidur Gudjohnsen's 25 goals for Iceland. It's a mostly Scandinavian based roster but browsing the team list I see good clubs in Sweden's Hammarby and Denmark's OB among others so it's likely a fairly talented group. We've seen European clubs give the US fits in recent months, and facing what could be a young defense we'll see if Iceland can break down the US when they're on the attack.

The USA's struggles mostly come on the offensive end, they want to build from the back but are so dreadful at times at doing so that they spend most of their time relieving the pressure on the backline. I'd love to see the US use the counter in this one, giving Zardes and Finlay chances out wide to use their speed and service to get Jozy and Bradley involved in the box. We'll see if the US can start 2016 on the right foot when they kick off against Iceland at 345PM later today.