What moves do the Revolution need to make ahead of opening kick 2016?

Share All sharing options for: Offseason Report: 3 Roster Holes the Revolution Must Fill

A quiet offseason for the Revolution has, in familiar fashion, evolved into a quiet preseason. With just two signings complete—first-round SuperDraft pick Jordan McCrary and former Sporting CP B defender Sambinha—the club still has a few roster holes to fill. The pending addition of a new DP will likely fill one of these gaps. But before the 2016 season kicks off, Brian Bilello & Co. have some work to do.

The Revs currently have eight open roster spots. What holes does the club need to fill?

The Revolution must forge onward without Jermaine Jones, whether the USMNT veteran ultimately comes to terms with the club or not. Doing so leaves the Revolution scarily thin at the holding midfield spot. Scott Caldwell, the team's 2015 MVP, will likely return in top form, but currently has limited cover.

If Jay Heaps wants to field two defensive midfielders (as he did for the entirety of Jones' season-and-a-half stint) the Revolution must bring in a proven midfielder to set up beside Caldwell. If Heaps trusts Caldwell enough to man the spot himself, he still needs a go-to option on the bench. Currently, unproven Zachary Herivaux and attack-minded Daigo Kobayashi and Steve Neumann stand as the only options. In preseason camp, Jay Heaps is analyzing a long-shot candidate in trialist Tyler Rudy, though the former Georgetown Hoya would likely serve as nothing more than a depth piece, if signed to a contract. Let's hope Bilello's mystery DP can plug this hole.

5 Preseason Storylines for the Revolution 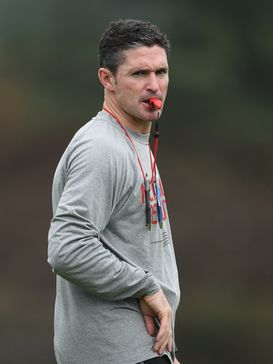 A mystery DP—plus four other reasons to stay plugged into the Revs this preseason.

Charlie Davies hit the ground running in 2015, scoring a team-high 10 goals during a hot-and-cold season. Second option Juan Agudelo struggled to stay fit, but bagged seven goals of his own. Heaps will likely seek ways to employ both forwards in his Starting XI, which leaves Sean Okoli—who showed flashes of promise in limited minutes last season—as the only remaining forward on the roster. Of course, the club turned to the draft to address this need, selecting Michael Gamble (second round) and Femi Hollinger-Janzen (third round). Neither player has signed with the Revolution.

Gamble has an inside shot to make the roster, though his size (5-7, 150 lbs.) fits the mold of an MLS winger—his secondary position—more than that of a true striker. This may leave room for Hollinger-Janzen to grab a roster spot of his own.

With no other forward trialists in camp, look for Heaps to sign both late-round draft picks, acquiring a pair of low-risk, high-potential forwards.

Heading into 2015 preseason camp, many Revolution supporters wondered if veteran goalkeeper Brad Knighton would succeed Bobby Shuttleworth as the club's starter. Shuttleworth ultimately claimed the number one spot and never looked back.

Ahead of the 2016 season, Heaps will need to acquire a third-string goalkeeper, a signing that will likely come from within his preseason roster. The Revolution gaffer is currently working out Trevor Spangenberg—who was under contract with the club last season—and former Fairfield standout Matt Turner. With Knighton in firm control of the number two spot, Heaps will bring in a third goalkeeper for nothing more than depth.