From a familiar face (Darrius Barnes) to a new one (Jordan McCrary), we offer four candidates for "Breakout Player of the Year."

Share All sharing options for: 2016 Season Forecast: 4 Breakout Candidates for the Revolution

In 2015, Charlie Davies broke into the spotlight for the Revolution, turning in a 10-goal, four-assist campaign. Who will follow in his footsteps this season? A seasoned veteran or a welcomed newcomer? Check out these four "Breakout Player of the Year" candidates:

Three seasons ago, Agudelo scored 7 goals in 14 appearances. Last season, while appearing in 18 additional matches, he could only equal his 2013 total. Agudelo has undoubtedly underperformed since rejoining the Revolution, failing to consistently find the Starting XI behind a resurgent Charle Davies. But in 2016, Jay Heaps will, in all likelihood, find a way to get both Davies and Agudelo on the field more consistently, allowing Agudelo to put together his first complete MLS season. That could mean double-digit goals—a breakout campaign for the Colombian-born forward. 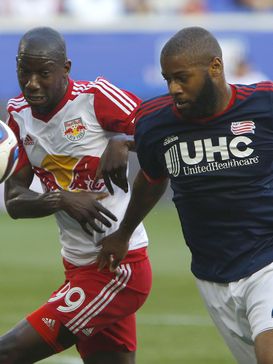 With Sambinha in the fold, the Revolution have newfound depth along the back line.

While Barnes isn't new to the fold, the 2016 season will reaffirm his importance on and off the field. The seven-year veteran appears to be fully recovered from a knee operation, and provides cover at every defensive position. When recovering, Barnes was also a common presence around the locker room, and is undoubtedly a quiet leader. Both elements will be understandably welcomed by Jay Heaps, as this team missed the Duke product when defensive depth was lacking.

I'm not exactly sure how a former number one overall pick has a breakout season, as Farrell has been a fixture in the starting lineup since being the top pick in 2013. Now a seasoned veteran at both right and center back, the only knock on Farrell is his occasional nightmare game. We all love the acrobatic clearances that happen weekly, but Farrell has struggled with his positioning at times. Despite that, he's more than ready to make a jump into vaunted Revs defender territory and have a Michael Parkhurst 2007 or Jose Goncalves 2013 type season. Farrell has long stretches of solid consistency, but defensively it's time for him to turn those stretches into dominant performances on a weekly basis.

Signed so soon after being drafted, it's looking more and more likely that McCrary could be the go-to right back this season. This wouldn't be a bad decision since the UNC product has impressive speed and talent. Furthermore, McCrary's defense-first mentality would compliment the forward-thinking mindset of Chris Tierney.

Who's your preseason pick for Breakout Player of the Year? Vote below.