The forward can play centrally and out wide, and he feels that only benefits him.

The New England Revolution came into today's SuperDraft needing to add attacking depth, and they did just that with the 30th overall selection.

Michael Gamble, a forward from Wake Forest University, hailed the chance to play professionally, even if he first spoke to Jay Heaps and Mike Burns after stepping off the stage in Baltimore, Maryland. Despite that, Gamble hopes to couple versatility with a soccer brain that produced 24 goals and 20 assists over a four-year career as a Demon Deacon.

"My best quality is just my adaptability," Gamble said. "I'm very versatile. I can play any of the attacking positions on the field and change up my game to wherever I'm playing. That's really given me a lot of special talent and I'm mentally strong." 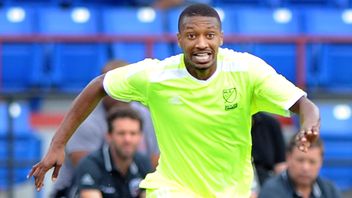 With their first pick of the MLS SuperDraft, the Revolution added North Carolina fullback Jordan McCrary.

Gamble conceded that he didn't follow Major League Soccer much growing up, but he's excited to join a team with attacking intent that isn't afraid to throw numbers forward. He has his eyes set earning respect from the first day of training camp onwards, and has a few connections to New England's roster.

The Columbia, Maryland native played with Diego Fagundez on a youth regional team and played a few academy games against the Revolution academy teams. Add in the fact that Gamble will slide alongside talents like Fagundez, Kelyn Rowe and Teal Bunbury, and it makes for an encouraging future.

"It's exciting for me," Gamble said. " ... For me, I know that wherever I end up I end up with better players and it makes me a better player. To be able to learn from guys with attacking experience, I know I'm just going to improve as a player."

Gamble also expressed excitement at New England's recent success. The Revs are two seasons off an MLS Cup appearance, made the playoffs last year and have sights set on returning to those heights.

Similarly, Gamble thrived at Wake Forest and hopes that will translate to preseason camp in the coming weeks.

"It's going to be an exciting experience seeing what they have to say, so I'm really appreciative they gave me this experience," Gamble said. " ... I know several players in the past have had a lot of success. I'm hoping to bring a lot of that success here as well."