A penalty rebound and a tap-in gave Jozy Altidore a double and the USMNT used a strong second half in a come from behind win against a solid Peru .

For the first forty-five minutes the United States looked like the same team that was knocked out of the semi-finals of the Gold Cup.

A penalty from Jozy Altidore equalized and his close range finish both in the second half gave the USMNT a strong second half to build on with a second friendly at Gillette Stadium coming up on Sept. 8th vs. Brazil.

It was a dismal start for the United States who fell behind 0-1 to Peru in the first half at RFK Stadium in a friendly a month before the Confederations Cup playoff against Mexico.

The USA struggled to complete passes or generate consistent offense in the first half and overall continued a sluggish trend dating back to the Gold Cup earlier in the summer. Their slow start was magnified when Peruvian striker Daniel Chavez was able to get a shot off at the top of the box.

US centerback Omar Gonzalez strangely backed off initially, but did close down Chavez and was able to get a partial deflection of the shot. Unfortunately, that deflection looped the ball into the top corner of the back post over a helpless Brad Guzan for the opening goal.

The first half stats were not kind for the US, and the scoreline reflected a good start for Peru despite a lack of great chances on goal. The US did end that half on a good spell of play that saw Jermaine Jones rip a strong shot forcing Peru's keeper Perdo Gallese into a fine save.

Jones' day would end after a solid 70-minute shift in midfield as he works his way back to full fitness with from hernia surgery with the New England Revolution.

But the second half belong to Jozy Altidore, as he worked a penalty in the 59th minute when he put a nice move in the box that caused defender Carlos Zambrano to hold him. Referee Francisco Chacon from Mexico pointed to the spot and while Gallese saved Altidore's initial stop he was unable to stop Jozy from smashing home the rebound and tying the game.

The go-ahead goal in the 68th involved a strong counter involving both wingers for the US, with DeAndre Yedlin starting the action down the right side following a turnover in Peru's half. His cut back intended for Altidore was cut out, but the ball managed to find Zardes. The youngster, who was arguably the best American attacker on the day, sent in another cross to the middle. The ball took a fortunate deflection of a Peru defender to find Altidore unmarked at the back post for a calm finish.

Peru frantically searched for an equalizer late, and had their best chance to score in the second half came right before the US winner. Chavez forced Guzan to save in the 67th minute and the rebound was pounced on by Edison Flores. With Guzan mostly on top of the ball, Flores continued to attempt to force the ball past Guzan before a foul was called and Flores was dumped to the ground by Geoff Cameron as he came to the defense of his keeper. 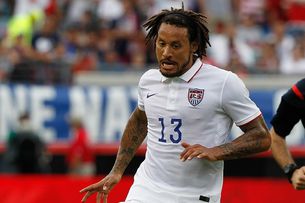 Jones played 71 minutes in his return to national team duty as he continues to recover from hernia surgery and also had the USA's best scoring chance in the first half.

Defensively it was a mixed performance for the United States. Gonzalez' bad decision to drop back on Chavez cost the United States a goal and the passing out of the back with Omar and John Brooks was not good in the first half. Tim Ream was solid defensively, especially in the second half, down the left flank but was caught out going forward in the first half on occasion as the US struggled to get forward. Michael Orozco likewise had a quiet defensive first half before being subbed out for Cameron as the Klinsmann deployed an all-centerback corps in the backline to start.

The second half gives the United States a solid platform to work off of and improve going into the second friendly against Brazil and the important playoff game against Mexico. The midfield continues to struggle with possession but at times the counter attack and defensive pressure can make up for it when the US is able to play to its strengths. Defensively there are a lot of improvements to make though some of the USA's issue involve injuries to their fullback corps.

The United States kicks off against Brazil on Tuesday, Sept. 8th at Gillette Stadium at 8pm EST with coverage on ESPN2.