With just seven games remaining on the Revs schedule, now is about the time where looking at the standings can actually tell you something important.

The Revolution are without a doubt playing their hardest two games in the next four days, at Toronto FC today (ESPN2, 5:00PM EST) and the New York Red Bulls midweek on Sept. 16th (CSNNE/MSG 7:30PM EST) getting two results will be absolutely crucial to their postseason standing.

It's likely that the six playoff teams in the East are already set, 6th place Montreal having multiple games in hand on everyone below the red line. Toronto and New England sit in 5th and 4th respectfully, and a road win for the Revs would give them a six point cushion over TFC. A loss, would put the two teams level on 40 points with Toronto having a game in hand. 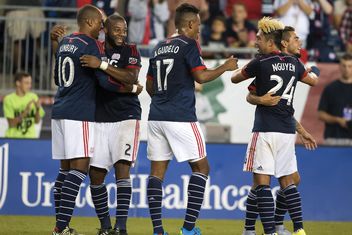 Since August, New England has been unbeaten in six games and have currently won four in a row. Jon Sigal takes a look a the fine form the Revs are in.

So with the status of midfielder Sebastian Giovinco in doubt, he missed Toronto's last match, as well as a number of other players returning to the starting lineup, New England needs to capitalize on this game. With the Red Bulls coming to New England midweek, one of the two games if not both, are must wins for the Revs to all but guarantee at least a home game in the first round of the playoffs.

It's likely that without a win against NYRB the Revs will not catch New York at the top of the East standings. With their rivals sitting five points clear with a game in hand, two after the Revs-TFC match today, New England will still need help down the stretch to get atop the East.

A far more likely goal is secure a first round bye in the East with a second place finish. Wins against Toronto and New York would vault the Revs into second place, one point ahead of DC United and two points ahead of the Columbus Crew with all teams on 29 games played. A favorable schedule down the stretch, a home and home with Montreal Impact the only playoff team they'll face, means the Revs do control their fate as far as playoff seeding goes.

The upcoming week for New England, with three games in seven days, could cement their place in the hierarchy of the Eastern Conference. The top six teams in the East are likely going to the playoffs, it's just a matter of seeding at this point. New England in good form, currently on a 4-game wining streak and unbeaten in six, can vault from the mid-table to perhaps pressure New York at the top. Stumbling this week could keep the Revs in the mid-table quagmire possibly fighting their way just to host a game in the first round.

With the new playoff format having single matches in the first/quarterfinal round in each conference, avoiding the round all together with a bye as one of the top two seeds is ideal. The Revs are certainly in a position where they can grab one of those two spots but they'll be tested this week.

Jermaine Jones is nearing full fitness and coming off international duty with the United States. Lee Nguyen and Diego Fagundez have been in top form during the Revs recent unbeaten streak and Juan Agudelo coming off the bench has proven to be a dangerous weapon up top for Jay Heaps, with two goals in his last three games. The Revs defense anchored by centerbacks Andrew Farrell and Jose Goncalves have helped keeper Bobby Shuttleworth to three straight clean sheets. Chris Tierney has been of the league's best left backs this season and veteran Jeremy Hall helped stabilize the backline when he took over the starting role at right back.

Just like last season, the Revolution are getting into their best form late in the season. Having Jones fully fit down the stretch will be the most important factor for the Revs, so it will be interesting to see how Jay Heaps rotates his lineups, if he does at all, during the week. Certainly players like Agudelo, Teal Bunbury and Daigo Kobayashi could make spot starts to spell the regulars who have been starting during the winning streak.

I'd expect the Revs best lineup midweek against the Red Bulls, but it's possible to see a change or two today and this Saturday against Montreal. Jay Heaps will have to balance pushing for the top of the table and first round bye with keeping his squad healthy going into the playoffs. Going strong this week will not take them out of a playoff spot and the Revs have a late bye week in October as well to give Heaps' team time to rest before the last game of the season and the playoffs.

But looking ahead is always dangerous. This afternoon's game against Toronto is incredibly important for New England's playoff status. If the Revs want to jump start their playoff push towards the top of the table, they'll need a big road win tonight. The last time these two teams met, the Revolution won 3-1 against a 10-man TFC squad that saw Jozy Altidore sent off in the first half. Giovinco was subbed off at halftime and Michael Bradley didn't feature in the game at all so it's tough to gauge just how well the Revs played in that match against a less than full strength team.

Facing a similar situation with Toronto just getting several players back from injury and suspensions and still possibly missing several starters, the Revolution have a very good chance to extend the gap between themselves and the 5th and 6th seeds. Avoiding a road game in the first leg is crucial, but the Revs should be aiming higher and in their current form should expect to improve their fourth place standing in the East.

This week will give the league a very good indication of where the defending conference champions stand as MLS Cup contenders.