The USWNT's victory tour is about to kick off while the NWSL playoff race is at a high boil.

The United States begins their victory tour on August 16 against Costa Rica, followed by a second friendly against Costa Rica on the 19th.  Both these games obviously fall square in the middle of the NWSL playoff race and head coach Jill Ellis has stated that the first two games are about celebrating the World Cup roster and will therefore not feature any non-World Cup callups.

The first game falls on the 16th, the same day as Chicago Red Stars vs. Washington Spirit, a game that could see the Spirit leapfrog FCKC into a more secure third-place spot should they win. The second game on the 19th leaves only two days until a brace of NWSL games on the 22nd with serious playoff implications. The Portland Thorns and FC Kansas City are at third and fifth in the league. If the Thorns manage to beat Sky Blue FC and FCKC loses to Boston, then there will be three teams sitting at 25 points with only a handful of games to go. Alternately, if Portland loses but the Houston Dash win on the 21st, Houston will be one place out of playoff contention. Contention for three out of the four playoff spots is tighter than a poor student on a budget. 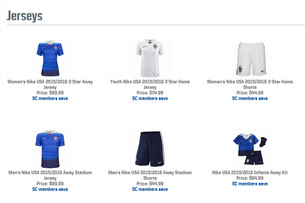 In a curious decision, Nike has cancelled a men's/unisex version of the USWNT "three-stars" championship jersey, a decision Stephanie Yang says makes no sense.

Travel from the friendly isn't too terrible for any one team's national players; the United States plays in Chattanooga that night, and the three games on Saturday are at Yurcak (Piscataway), Swope (Kansas City), and BBVA Compass (Houston).  The real imbalance will probably come from who sees playing time and who doesn't. Ellis may decide to rotate through her roster in order to keep everyone as rested as possible, or she may feel obliged to give crowds the same starting lineups we saw at the World Cup, which would place greater loads on players like Carli Lloyd and Lauren Holiday.

Let's break this down. There are six teams that are most heavily impacted here, starting with the Red Stars and the Spirit due to straight up not having players available. The other four teams may still have their starters, but only after they've potentially played two national-level games and a had a travel day.

Of these players, Lauren Holiday and Hope Solo are both on NWSL's injury report, though Solo did recently play a full 90 for the Reign. While the Reign are contentedly sitting at the top of the league with a playoff spot assured, FCKC's tenuous position in third place would surely see Holiday rested in an effort to get her healthy for her club's final push to the playoffs.

We can also see that FCKC and the Dash are disproportionately affected by the friendlies due to the number of callups from their teams. Becky Sauerbrunn, Carli Lloyd, Morgan Brian, and Meghan Klingenberg will almost certainly all see at least 90 minutes. Amy Rodriguez will probably get time. Heather O'Reilly could get field time or she could continue to be the ghost that haunts the USWNT's bench.

There are a few other factors. The Breakers are much more vulnerable without Alyssa Naeher, who will almost certainly not see any playing time during these friendlies. Sky Blue relies heavily on Kelley O'Hara to generate attack. No team is going to go without some kind of impact from having their national team players travel for these games, especially when they could have gotten a week of rest and practice with their clubs.

The cherry on the badly scheduled icing is that these games take place in Pittsburgh and Chattanooga. It's not certain that games in these locations would yield tangible long-term benefits for NWSL. True, the publicity from these televised games may help continue to the league's post-World Cup push just enough to ensure that NWSL season four is a lock, but why not maximize USSF and NWSL synergy by creating more deals like the one the Seattle Reign are offering?

Heads up! If you placed your 2016 Season Ticket deposit, we just emailed you our exclusive #USAvBRA pre-sale code.

The United States plays Brazil at CenturyLink field in Seattle on October 21st and those Reign fans who reserved 2016 season tickets were given first chance to buy tickets to the Brazil friendly. This is a fantastic and easy promotion that helps to link together the national team and the club in fans' minds. One brand helps reinforce the other.

Otherwise, the victory tour seems completely detached from the NWSL. Between this awkward bit of scheduling and the lack of cross-promotion between federation and league, the victory tour is more of a disruptive nuisance than anything.

Perhaps USSF felt they couldn't wait any longer to schedule friendlies without losing a critical amount of World Cup glow. The first friendly already takes place six weeks after the final and waiting for the regular season to be over adds another three weeks to that timeline. Waiting for semifinals adds a full month. But after the first month, does it really matter how long the federation waits? After a month, bandwagon fans are gone. Anyone the sport was trying to capture who is still interested in the team after a month would surely be aware of the league and its needs.

There is no denying that the players deserve a victory tour. They may even be contractually entitled to one if they negotiated for it in their collective bargaining agreement. Winning the World Cup is a tremendous accomplishment that deserves to be fêted. But there was a way to organize this tour to maximize its benefit to NWSL, instead of seeming to treat it as an afterthought or nice-to-have.

There are four games left to schedule. There are undoubtedly NWSL teams that could use a publicity boost more than others (looking at you, Sky Blue FC and your under-2k average attendance). It would be nice if USSF could bring its clout to bear on a problem that directly affects it.