The Revolution's offense came to life on Saturday night, finishing nearly every opportunity that came their way.

In a game that marked Jermaine Jones’ return to the New England Revolution lineup, the home side was able to extend their unbeaten streak to three games via a 3-1 victory over Toronto FC. 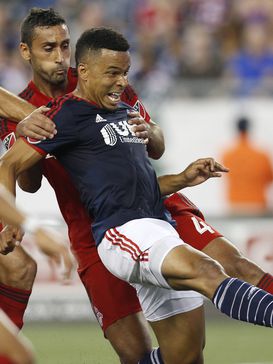 So you should keep watching.

While both teams were content to sit deep in the game’s early-goings, things sprung to life in the 25th minute. Robbie Findley, who got the start at right midfield for the Reds, hauled down Charlie Davies as he embarked on a counter attack towards Joe Bendik’s goal.

On the ensuing free kick, Chris Tierney clipped a ball over Toronto’s back-line and into the path of Kelyn Rowe’s peeling run. With a delicate touch, Rowe cushioned the ball across goal for Davies to bundle home, signaling a 1-0 Revs lead and Davies’ eight goal of the season.

In the 39th minute the fortunes got increasingly beneficial for New England when Jozy Altidore inexplicably lashed out at Jose Goncalves, leaving Chris Penso with no decision but to give the American a red card.

Down a man, matters got worse for Toronto in the 44th minute when Damien Perquis tugged down Rowe in the box on a free kick. Penso awarded the Revs a penalty kick and Lee Nguyen stepped up to calmly dispatch into the side netting for his third goal in as many games.

Carrying a 2-0 lead into the second half, the Revs patiently probed for a third tally, but Toronto’s shape with 10 men proved to be troubling. Yet, their questions were answered in the 62nd minute when Davies found his second of the evening.

After the Manchester, N.H. native won a free kick on the right side of goal, he made no mistake with the finish of another Tierney service when he was left unmarked in front of goal. With a 3-0 goal lead, the Revs were comfortably ahead and looked content to see out the match.

However, the slightest ounce of complacency resulted in Toronto climbing back into the match in the 75th minute. Jonathan Osorio, who was left open atop the 18-yard-box, bent home a pinpoint finish beyond the outstretched arms of Bobby Shuttleworth.

Despite the moment of worry, the Revs were able to set the tempo with the majority of possession and eventually put three points in the bag. With seven points from their last three games, the Revs return to the field on August 15 when they take on the Houston Dynamo at Gillette Stadium.