The USA held on for a massive three points in a 2-1 win over Honduras while Haiti snatched a deserved late equalizer against Panama in a 1-1 draw to start Group A play.

Winning the CONCACAF Gold Cup is not about the team that always plays the best soccer, but being the team that can play the best while covered in bruises.

The United States held on for a 2-1 victory over Honduras from Toyota Stadium in Frisco, TX to move into first place in the Group A standings after the opening game. The match featured 29 total fouls but just two yellow cards.

It was a rough start for the USA as Honduras looked like the better side early, with Andy Najar causing most of the trouble down his left flank and striker Anthony Lozano forcing Guzan to make his two early saves. John Brooks was booked in the 16th minute for a hard tactical foul at midfield on Mario Martinez but Honduras wasn't able to capitalize on the referee's advantage call.

In the 25th minute, the US were able to capitalize on a corner kick as Honduras was unable to clear the ball out of their own area. Jozy Altidore recovered the ball on the near side of the box and fired towards Honduran keeper Donis Escober. While Escober made the initial save, it came straight to Dempsey at the center of goal and he nodded home instinctively for an ugly opener befitting a CONCACAF Gold Cup match. 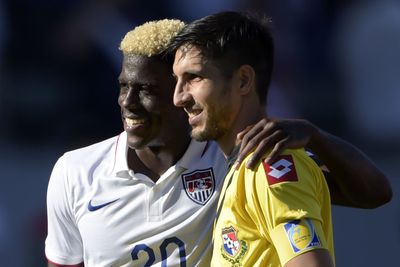 Everything you need to know about the USA's group as well as television and game schedules all in one place.

Minutes later, Fabian Johnson would play DeAndre Yedlin through and the US winger was unlucky to have the ball get caught in his feet slightly, giving Escober enough time to close down and make the save to keep the game at 1-0.

For the rest of the game, Honduras was left to settle for bad long range shots as they were unable to capitalize on most of their good build up play and set piece opportunities. Andy Najar's wonderful solo effort at the end of the half, effortlessly going around Timmy Chandler and going right through Yedlin before firing high was Honduras' best chance after their opening salvo. Honduras took a total of sixteen shots but put just three on target as compared to five shots on target out of six for the USA.

GOAL #USA!!! Clint Dempsey with his second of the match. 2-0. #USAvHON pic.twitter.com/KWCvjACzxS

This left the USA with an opportunity to widen their lead in the 64th minute and on another set piece, Michael Bradley would find Dempsey unmarked at the back post for a powerful, downward header and a 2-0 US lead.

Honduras would not go away quietly, and despite an interesting substitution from Jorge Luis Pinto removing Andy Najar just before the USA's second goal, one of his substitutions made a major impact right away. Entering as a sub in the 69th minute, Carlos Discua played a neat combination with Wilmer Crisanto ran through a weak challenge from Ventura Alvarado and blasted a left-footed strike over Guzan's shoulder. It was a deserved goal but perhaps just too late for Honduras to complete their comeback.

Bryan Acosta's free kick in stoppage time went straight into the US wall and the referee signaled for full time giving the US a much needed three points to start their Gold Cup campaign.

In the first game of the evening, Panama looked to get out to a fast start on group minnows Haiti but keeper Johnny Placide and Les Grenadiers had other ideas as Haiti struck late for a 1-1 draw.

Panama threatened in the first half, Luis Tedaja's pair of bicycle kick efforts and Valentin Pimentel's shot into the side netting highlighting the offense for Panama who were slow to get into the game. Haiti was consistently able to get out on the counter thanks to causing turnovers and aggressive distribution from Placide in goal.

But Panama was able to strike first, capitalizing on a whiffed cross by Haiti's backline in the 56th minute when Alberto Quintero smashed a first time shot into the top corner past a helpless Placide. It was a deserved lead for Panama who had controlled the middle of the game, but they were far from dominant on the day and left the door open for Haiti to get back into the game.

Which naturally Haiti accepted willingly when Duckens Nazon latched onto a long ball turned his defender and slotted home past an onrushing Panamanian keeper Jaime Penedo. It was a deserved point for Haiti who for long stretches stifled Panama's disjointed attack and counter attacked numerous times with numbers the other way.

it's a disappointing result for Panama who now have to play the two toughest teams in the group. The USA leads the group with three points and plays Haiti on Friday in Foxborough, MA at Gillette Stadium. Honduras, sitting in last place, will play the first game of the double header against Panama.