Share All sharing options for: The United States Just Won a Third Star and it was Amazing

There are many ways to describe this World Cup final. Straight up recap, florid prose, and all the flavors in between. But to perhaps put it most succinctly, allow me to quote from my notes:

Amidst the white, hazy smoke drifting into the stadium from nearby forest fires, the United States stayed ice cold to dominate Japan 5-2. The crowd was almost entirely dominated by red, white, and blue, sending up a roar that bounced off the walls of BC Place and settled inside of you. I had the good fortune to be at the World Cup final in person and the shock still hasn't worn off. 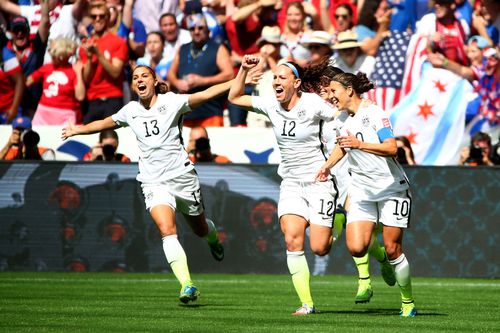 Carli Lloyd's hat trick in the opening sixteen minutes highlighted a rampant 4-0 start for the USWNT en route to a 5-2 victory and their 3rd World Cup title and first since 1999.

Well, on the last one the answer is: nearly everyone who's been following the women's national team for more than just this month. Morgan Brian was key to the United States' ability to push forward and create chances around the box. Also key: Becky Sauerbrunn, who several times positioned herself in just the right spot to break up Japan's attack and get the ball moving forward for the Americans again.

The entire USWNT defense continued their outstanding run in this game. They kept the United States in this tournament when the going was rough in the attacking third. They did the hard work, the dirty work, the unsung and underrated work that kept the team afloat until the offense was finally able to adapt and produce.

And speaking of production: Carli Lloyd.

Carli Lloyd somehow saved up every scrap of vim and vigor over the course of the tournament and then released it all in this game like someone sabering a champagne bottle. She played like there was something inside of her clawing to get out. She played like not just her future but the next generation of Lloyds depended on it. When she wasn't scoring hat tricks, she was stepping to every Japanese player on the pitch, forcing turnover after turnover. Grown adults literally sobbed in the stands as she unrelentingly drove the USWNT to victory. She was, in a word, magnificent.

There are more accolades for this team: Megan Rapinoe was a creative engine. Ali Krieger and Meghan Klingenberg patrolled the flanks like workhorses. Julie Johnston, own goal notwithstanding, showed her quality in both stopping play and contributing to the offense. Hope Solo was jealously possessive of her airspace and established a no-fly zone around the goal. Tobin Heath created more than she got into trouble, which is more of a compliment than it sounds. The United States pressed Japan hard, knocking them into a ditch that was just too big by the time they could assemble what they needed to climb out.

This was not a narrow victory that overcame great odds. This was a defiant, all-encompassing, in-your-face declaration of superiority. It was a display that should have Americans clamoring for more. (On that note, national team fans who are new to the club game in the U.S. should check out their local NWSL side if they have one.)

Discussions about subbing decisions and coaching tactics and who was the actual architect of this success can wait until morning. Those discussions must happen to ensure American dominance for years to come. But for tonight, bask in it America. Kiss the crest on your jerseys, point to the names on the back, toast the players who sent you to your feet and made you feel like you were glowing from the inside out. This third star has been a long time in the making, and for one night, we really are one nation, one team.