The Australian striker discussed her World Cup with Australia, her comfort with Boston, and her hopes for Australian football.

Kyah Simon had a blinder of a World Cup for Australia, took the best vacation ever, then got back to the grind with the Boston Breakers this week.

"It was an amazing experience," she said after a light practice with the Breakers before traveling. "Going to my second World Cup I kind of knew what to expect, but you know, you work four years between each one of them so it's always a significant experience and I enjoyed it with the girls. We had a really good bunch of girls going into the tournament. I think we got some good results. Disappointing finish, but we're proud of what we achieved."

Now that her paperwork has cleared, she's expected to travel with the team for their away game against the Chicago Red Stars. Simon could be the answer to many of the Breakers' problems in the 18-yard box, taking what Kristie Mewis and Steph McCaffrey are creating and finishing it off properly. Boston desperately needs goals and Simon sees herself as a striker. 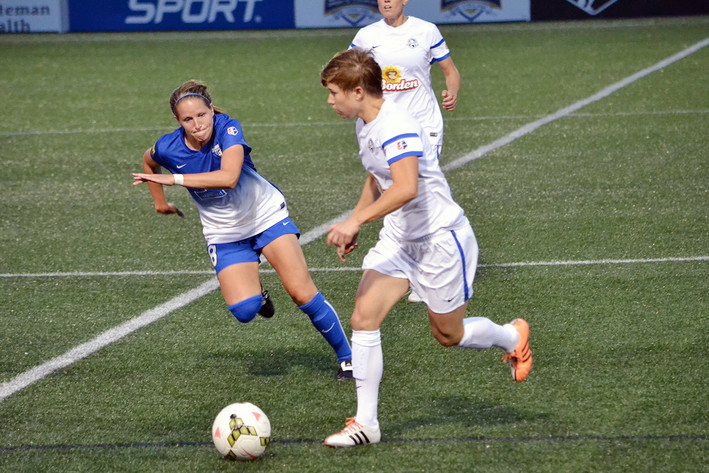 "All throughout this year leading into the World Cup I was, I mixed between the 10 and the nine spot," she said. "And coming back from my knee it only clicked at the start of this year that I was coming back and trying to perfect the 10 spot, but my original natural position is the nine and I was making it even harder for myself. It was almost an uphill battle to, one, get back to where I was, but then to get back and try to perfect a brand new position is even harder which I didn't even realize for myself. And as it neared closer to the World Cup, as soon as I was in that nine spot it just felt so natural and I just felt like I'm the most effective when I'm in that role."

This isn't Simon's first go round in Boston. She originally played for the Breakers in WPSL Elite, as well as the first season of NWSL. Her reintegration into a much-changed squad seems to be going well.

"I'm just super excited to be here in Boston," she said. "It almost feels like I never left. You know the team's been so welcoming and all the staff members, all the club, they've been so overaccomodating for me, it's just been really homelike."

Simon credits both the city and the team for her quick adjustment. "I think I just really love the city. It's just got a good vibe to it. The club's been great—all three of my seasons, including this one. It always helps when we've got a great bunch of girls that are willing to learn new things and build together. It's just been an enjoyable place, especially having the nice hot weather.  And missing winter back home is always nice."

Back home, Simon plays in the W-League. Her most recent club is Sydney FC, who she helped win a championship in 2013. The W-League is technically older than NWSL, but runs leaner. In Australia, Simon divides her time between soccer and a day job.

"The number one difference [between the leagues] is the professional side of it," she said. "When I'm here I'm a full professional. I don't have to worry about getting a job outside of it. Basically train and go to the gym and then have kind of the rest of the day to recover and look after myself. I don't have to then run off and work nine to five like I do back home. So that's just a luxury that I'll never take for granted because we don't get that luxury back home during the W-League. During the W-League you're training after work hours so you can go work and earn your salary throughout the day, and then at night you have to train and expect to be at 100 percent when you've possibly been on your feet for eight hours of the day already. So I definitely think I'm able to invest more into my body and be at a peak performance more here because that's my sole focus."

"I think the intensity of training here, the length of sessions, the regularity of training and things like that... you can definitely take it back to the W-League. You know when you've got a lot of factors weighing in your favor, like I said, not having to work here, and football or soccer being your sole focus, it's so much easier to turn up and to want to put in a 100 percent cause you're not tired from working or anything like that.... Just the experience of playing with other international players and playing in a different league and seeing the way that different coaches or different players can look at things and you can definitely take that experience back to your home country."

As for her home country, Simon was optimistic about the future of the Matildas, especially as they were the only team to score on the United States in group, managed to progress through knockout rounds for the first time after beating Brazil, and held Japan scoreless for nearly an entire match.

"I think with the way that we performed, with the teams that we were up against as well, there were a lot of odds against us, but I think we really put Australia and the Matildas and women's football in Australia on the map. I think we got some recognition throughout the tournament for being competitive and sometimes dominating some of the best teams in the world as well." She added, "I definitely think that with [coach Alan Stajcic] at the forefront driving that then FFA are willing, or hopefully will be willing, to jump on board as they've seen what can happen when they invest some resources into us — what we can achieve then on the big scale."

Last but not least, Simon answered that age-old question: in a zombie apocalypse, which teammate would you have to leave behind, and who would lead the rest of the team to safety?

"Probably be our most unselfish player and that's Teresa Polias. She would be probably the first to stick her hand up and say, you guys go, I'll stay behind. She's a sweetheart. And who would lead the pack - I'd say Polkie [Clare Polkinghorne]. She's super wise, she's smart, she's got those natural leadership qualities and obviously she's our co-captain so she'd be there as well."