In an interview from March, Jose Goncalves said he might soon be heading to Europe. On Wednesday, the captain was a bit more reserved.

Last Thursday, Jose Goncalves retweeted an interview from March 2015. The online translation of the Swiss article implied that captain’s time in New England could soon come to an end, perhaps even within a year. When asked for clarification at Wednesday’s practice, Goncalves had little to say. 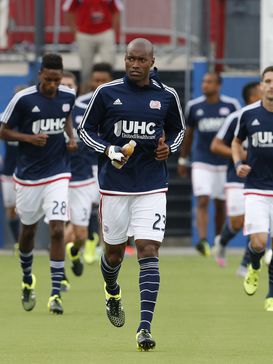 Could 2015 be Goncalves' last year in New England?

"I don’t really want to talk about that," Goncalves said. [I want to talk] more about soccer because right now the main focus is winning. It’s not what I said when I have time to do an interview. For me, right now, it’s the team, the focus, the winning. After, I can start talking about the other stuff."

Although Goncalves is suspended for this weekend’s meeting with New York City FC, he remains an important part of the team’s preparation. Participating daily in practice, Goncalves is pushing his teammates and offering advice.

"Like everyone, [I’m] giving my best every day in training, making sure my teammates are ready," Goncalves said. "I think they are doing exactly the same. Everyone must be ready to work with his teammate, making sure his teammate, his partner is ready next to him."

Whether 2015 is Goncalves’ last year with the New England Revolution is yet to be seen. Regardless, Goncalves has enjoyed his time in New England, according to the interview conducted by Swiss Made Football. When asked to name his favorite part about the region on Wednesday, Goncalves offered a bit more than he did earlier.

"Foxboro, the stadium," Goncalves said with a smile.