The 3rd Yellow - Parkhurst's First Red and the DisCo Strikes Back

For the first time ever, an MLS referee sent Michael Parkhurst to the showers early. But was Silviu Petrescu right in doing so?

Share All sharing options for: The 3rd Yellow - Parkhurst's First Red and the DisCo Strikes Back

I don't actually think Paul Rejer and the PRO referees know what they're getting into here:

Seriously guys, this is the internet and Twitter only has 140 characters for their explanation. I have all the space I will ever need for my long winded dialogue because it's clearly snowing in Boston again. Why? For starters, former New England Revolution player and 2007 MLS Defender of the Year Michael Parkhurst, now playing for the Columbus Crew, received his first MLS red card last week. 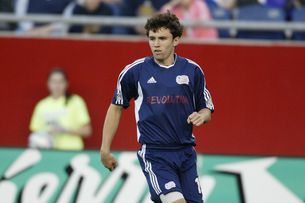 John Sigal profiles the former Revolution defender and RI native as his career has taken him from Wake Forest to Europe and even the USMNT.

Parkhurst already served his suspension midweek when the Crew traveled and lost to DC United, and the team declined to appeal the red card to the MLS Independent Review Board, because the early indications were that it would not be overturned.

Before we get to the play in question, there's one thing I have to address before we start. I want everyone to understand Petrescu's options as the referee for this play. Because Ethan Finlay after the game to Andrew King of MLSsoccer.com seems confused:

"I think it hits his hand, but he doesn't extend his hand out to make it a deliberate red card," Meram said. "I don't think he had enough time to put his hands behind his back. So maybe it's a PK, but to change the game like that, it hurt us a little bit."

Petrescu has only two options for this play. Option A, "The No-Call," is that he does not think Parkhurst has committed a handball and allows play to continue. Option B, "The Call," is Parkhurst has committed a handball offense inside the penalty area to deny a goal scoring opportunity on the goal line and to point to the spot and show Parky the red.

That's it. There's no middle ground here. It's not a penalty and Parkhurst escapes further punishment, if Petrescu has judged a handball offense on this play then his only option is to go all the way with it and eject Parkhurst. Something he knows he's going to do from the moment he blows the whistle.

And looking at the live shot and replays, I don't think he's wrong.

Now that I've laid out all of the options regarding this situation, I have to tackle another issue I've seen with this play and from commenters in general. Yes, Parkhurst's arm is clearly tucked in to his body long before the shot takes place. I will not dispute this, because it's very obvious, but I will dispute that a having an arm tucked in allows you to do what ever you want with your arm/hands.

The classic arm in a natural position is there for referees to interpret deflections and when the player has little change of getting out of the way of a ball and it strikes their arm or hand. Parkhurst is not in a "ball-to-hand" situation, he clearly is aware of his surroundings being on his own goal line and has tucked his arm in to avoid exactly what he gets called for in the end.

For those that think tucking your arm in means you can do whatever you want because your arm is a part of your body, that's not true. If your arm is tucked into your body and you use it and your thigh to trap or more likely catch the ball, it's a foul. Just because your arm is tucked in doesn't mean you get to use it to manipulate where the ball goes or behaves, natural position or not, a handball offense is using your hand or arm to play the ball deliberately. I dislike "deliberately" because it's to literal in soccer lexicon but I'll explain that in a bit.

Sadly, Petrescu has the best angle looking straight at Parkhurst on the back post as Kaka chips a shot on goal following a corner. But even from the variety of replay angles I'm fairly certain of a several things Petrescu is likely to have seen during this play.

First, I do think the ball catches Parkhurst in the upper arm rather than his chest so there's little chance this call is wrong based on the fact it didn't touch the arm or hand. Second, is the slight movement of Parkhurst towards the ball, though I can't say for certain that his arm movement is before or after the contact with his arm. Third, is the way the ball comes off Parkhurst, it's too awkward. I know the ball is spinning rapidly from Steve Clark's punch and Kaka's shot, but for the ball to pop up like that is very strange. Even if Parkhurst is reacting to the ball hitting his arm, even unintentionally flipping the ball up like that is a reaction, it keeps the ball from going into the net.

I am left to conclude that Petrescu judged Parkhurst's motion to be a handball because of these factors, and since it prevented a goal bound shot from entering the net, he is left with no choice but to dismiss Parkhurst. Despite Parkhurst's arm being tucked in, this is not a ball to hand situation, and the deliberate (there's that word I mentioned earlier) motion toward the ball is what keeps the ball from going into the net. The decider for me is that I think without Parkhurst's movements, however slight they are toward the ball, there's a good chance the ball deflects off of him into the net. That's the deliberate part of the play, not Parkhurst intentionally swatting the ball with his arm, but being in a position to deliberately react towards a goal bound shot that is blocked with his arm.

I actually think that Parky is a little unlucky because a harder shot would've likely taken a more normal rebound and given him less time to react. Both of these factors would've gone into Petrescu's decision to call a handball. But the soft volley gives Parkhurst a chance to react and lean into the ball and turn slightly at impact, a motion that intentionally or unintentionally keeps the ball out of the net. It's not that Parkhurst deliberately, or blatantly, kept the ball out of the net with his arm, but rather his reaction towards the ball in which he played the ball with his arm first.

And once the whistle blows, we already know the outcome.

I doubt that Parkhurst is trying to commit a handball there, in fact, he's clearly trying to do the opposite. But despite these efforts I actually think Petrescu gets this one right. It's a unique play for sure for a variety of reasons, but the only person who had a straight on angle of the play was Petrescu and he made the call.

Now, I will hear arguments that Kaka entered the stands following the ensuing penalty kick and deserved a caution for excessive celebration or at least a midweek donation to MLS WORKS from the Disciplinary Committee. Somehow I don't think that will take the sting away from the fans in the Nordecke for the last two Crew games, but that was something clearly missed.

But the MLS Disciplinary Committee did dish out two suspensions this week to DC United's Chris Rolfe and the Seattle Sounders' Osvaldo Alonso. First, Rolfe kicks out in mid-tumble at Philadelphia Union player Vincent Nogueira after Rolfe was fouled. Fairly cut and dry on that one, but the play for Alonso is slightly more unfortunate. Ozzie fights through arm/horse collar tackle, which a foul has been whistled for Seattle, and then absolutely cleans out Felipe Martins of the New York Red Bulls. Regardless of whether or not Alonso hears the whistle here, that play is endangering the safety of an opponent, but the unfortunate part is were it not for that foul from New York, Alonso probably gets to that ball first.

So, there's a thousand words mostly on why Silviu Petrescu isn't crazy for showing Michael Parkhurst a red card and I hope this satisfies Mr. Rejer and PRO better than those silly 140 character tweets that mostly read "BUT HIS ARM WAS TUCKED IN?!?!?!"

We give referees very little praise for getting things right, especially when it's controversial and half the stadium already thinks they're wrong. But in this case, Parkhurst's handball raises enough question marks that I'm wouldn't be able to overturn this play on appeal. So the ruling on the field stands and not only that but I would be one opposite endline camera shot away from practically confirming the ruling on the field for Petrescu here.